Thinkin' (and Linkin') With a Cup o' Coffee

Share All sharing options for: Thinkin' (and Linkin') With a Cup o' Coffee 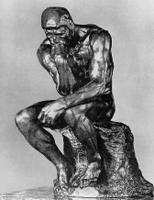 Over the weekend, I was honestly planning to make a case for the Tigers re-signing Todd Jones after this season. Given all the turmoil the bullpen has experienced, keeping an experienced reliever around seems like a good idea. Especially when no one else seems quite ready to take over as closer next year. But after last night, I'm re-evaluating that stance.

Well, sort of. It was only Jones' third blown save of the season. Okay, that's already half of his total from 2006. And he didn't blow his third save until mid-June last year. But I'm not going to overreact and say the Tigers need to stop giving Jones save opportunities. At this point, who the hell else can Jim Leyland put out there in the ninth right now?

I realize this isn't a particularly deep thought, but should you ever lose to a pitcher that catches a throw behind home plate with his face? I had a moment like that in fifth grade, which is about the time I realized I needed glasses. I should've tried to blame it on the lights like Edwin Jackson did.

Today's Tampa Tribune has a story about Gary Sheffield reaching out to troubled D-Rays outfielder Elijah Dukes, who's had some personal issues to deal with lately. As a Tampa native - and fellow Hillsborough High alumnus - the two have worked out together in the off-season, and people close to Dukes have asked Sheffield to become something of a mentor.

"I'm no authority figure, like you've got to listen to me," Sheffield said. "I just want to help him.

"I just don't want it to get out of control," he added. "When you start with the threats and the guns, that can get out of control. If you're talking about arguing with the umpires or something you're later going to regret, all of that can be fixed. ... When it starts going a little higher, then it gets a little scary for me and I get nervous."

At the risk of getting all "sports talk radio" here, however, I think the Tigers will have to make a trade to fix their bullpen. Unfortunately, the market is so hot for relievers that Dave Dombrowski might have to give up more than he may have wanted. Waiting for injuries to heal and trying to quick-fix with younger pitchers seemed like a good idea for a bit, but it's apparent that this thing is becoming contagious. Starters aren't going deep enough into games, and the relievers that are left are being forced into situations they shouldn't be facing.

Look at what happened last night: Leyland was emulating his buddy, Tony La Russa, out there. Three pitching changes in the eighth inning? He was scrambling for anyone to get a key out. Yes, I realize that's what has to be done right now, and if Jones closes out the game, I'm probably writing about how brilliantly Leyland managed the bullpen last night. But how much longer can the Tigers keep this up? Until Rodney comes back in a week or so?

By the way, the Tigers will be one of eight teams watching Troy Percival throw today. I might be kidding myself, but I'm beginning to have high hopes for this.

Last week, Mike McClary lamented the Yankees' interest in his man-crush, Todd Helton. But rumor has it that their closer, Brian Fuentes, was also drawing interest. Is that a name that should've been added to this week's poll question?

Here's what Bad Altitude had to say about Fuentes a couple of weeks ago:

[...] the lefty with the jumpy, clawlike sidearm motion has proven himself one of Colorado's most valuable pitching assets over the last two seasons. His nine saves so far in 2007 are all the more impressive when you consider that the Rockies only have sixteen wins total. Fuentes has shown a bit of a propensity for giving up the long ball this year but his WHIP is outrageous (0.72) and his strikeout rate should rally. They'd miss him tremendously if traded but on a contending team that might not use him as a closer and scale back his appearances facing righthanders, Fuentes would be a huge star.

Speaking of Mr. McClary, Episode #15 of The Detroit Tigers Podcast is now available. I'm not just linking to it because he dropped my name twice, either. (Nor am I trying to massage sore feelings resulting from referring to his Daily Fungo blog-mate, Doug Hill, as my "main man" last week. Ahem.)