Do the O's Have to Leave Already? Tigers 3, Orioles 2

Share All sharing options for: Do the O's Have to Leave Already? Tigers 3, Orioles 2

It's too bad the Orioles are skipping town, because they've really helped the Tigers get themselves straightened out before engaging in another AL Central clash with those pesky Kansas City Royals. C'est la vie, I suppose. That's baseball. There's always the next team on the schedule. The next town. Man, it would be totally cool if the Tigers could always play the Orioles, like the Globetrotters used to bring along the Washington Generals for their games.

But the fun and frivolity doesn't have to end just because these two teams are moving on. No, I think the Detroit Tigers' good fortune can continue, and I have an idea of how to keep this money train going.

How to Keep Sheff in the Groove:

As we've seen over the past three days, Gary Sheffield loves Orioles pitching like bears love honey. (No, I'm not suggesting the Tigers cover every opposing starting pitcher in honey from now on. That's not a bad idea, but ground balls could stick to them, which would totally be an unfair advantage. Though it would be fun to see them coated in insects on humid summer days...) He hit .500 against whatever Baltimore could throw at him, with two home runs and four RBI. (If I had the time, the know-how, and a good calculator, I'd figure out his slugging percentage and OPS for the series, but I'm just going to take a guess and say they were, like, .900 and 3.000. That passes the eyeball test, right?) His season average is now almost comfortably over .200, and it looks safe to say that his slump is over, as the Tigers are finally seeing the player they traded for last October. And really, we have the O's to thank for that.

So the Tigers need to figure out a way for Sheffield to think every pitcher from here on out is in an Orioles uniform. Something about that combination of black and orange does something to Ol' Sheff's hand-eye coordination. (Obviously, more than the black and orange of, say, a Tiger. But maybe that's because of the navy blue in Detroit's color scheme. Plus, he's not facing Tigers' pitching.) Here's what I got: 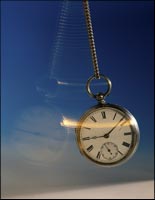 Gary Sheffield, you are getting very, veerrrry sleeeeepyyyy. Daniel Cabrera is on the mound. You're wagging that bat back and forth. Back and forth. Relax. It's no longer April. The weather is getting warmer. Cabrera just said something mean about your manager, like his breath smells like an ashtray. He's taunting you with that square jaw of his, Gary. That's making you angry. But you're focusing that anger, Gary. Focusing it on that baseball, which you want to hit. You want to hit it very hard.

The fans are cheering you on, Gary. Sheff! Sheff! Sheff! They're all wearing chef hats. Yes, I know that's stupid, but you're relaxing. And you're still angry. Like you will be in about two months when you see Inside Power on the bargain shelves at Barnes & Noble. What can I tell you? The book business is a tough one. Trust me, I've worked in it. People don't read anymore. They just go to bookstores to loiter and drink coffee. Plus, hardcover books are kind of expensive, Gary. You're losing focus.

Focus that anger. Let it fuel your swing as you strike the baseball like you wanted to strike Brian Cashman after he traded for Bobby Abreu. Hell, just picture Cashman in an Orioles uniform.

When I count to three, you will be the Hall of Fame hitter that everyone expects you to be. 500 home runs, Gary. It's close. Can you see it? You will be a hero in this town. Three words, Gary: Coney Island franchises. We're counting to three...

I think it's worth a shot. And if that doesn't work, maybe the Tigers can design some special contact lenses for Sheffield to wear. Some kind of tinted things that make the other uniforms look like Orioles uniforms. How would you make it so that he wouldn't see the Tigers uniforms that way? Look, just find the right people, pay them, and lock them in a lab, okay? Dammit, I'm a blogger, not an eye doctor. If the uniform thing is too hard, then just put Daniel Cabrera's head shot in the middle of the lens. It can't possibly be that hard if I just thought of it a second ago.

Give it some thought, Detroit Tigers. No charge. Consider it a freebie from a fan. But you can't use me in contract negotiations unless there's some payola involved, okay? I'm a man of conviction.

Hey, while you're at it, use this hypnosis stuff on Craig Monroe, too. Apparently, he can only be C-Mo or Clutch Craig-O when he's facing the O's. Dude, that's almost poetry.