Share All sharing options for: Cartoon Magglio = An All-Star Moment

I figured I wouldn't be posting anything today, as the day after the All-Star Game is probably the bleakest day on the sports calendar. But I'm sitting here with some time to kill and thought I'd post some thoughts on the 2007 All-Star Game that I jotted down before passing out (which was after Justin Verlander's inning).

My list of highlights isn't as comprehensive as Samela's, but to me, there was really only one moment from the evening that will be timeless: Magglio Ordonez, "Simpson-ized"!

He looks a little bit like Otto the bus driver, doesn't he?

I got this image from today's Detroit Free Press, but while scrolling through some message boards today, I noticed that some people are using the Simpson-ized Magglio as their avatar. And they have it in color. I try not to ask much from people, but I'm going to appeal to you, the readers of BYB, to help me out on this.

If you have a color image of Magglio and Sideshow Bob, I want it. I need it. I gotta have it. Please share the cartoon Maggs in color on your hard drive, and send a copy to ian(dot)byb(at)gmail(dot)com. You would be awesome if you did. What's in it for you? Man, that's a good question.

Other scribblings from my All-Star Game notebook:

A close second for my favorite moment of the evening was Pepper Brooks, using his baseball alias of Eric Byrnes, relegated to McCovey Cove, where he could only talk to his dog, Bruin. 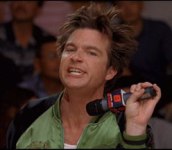 Byrnes later decided to prove to everyone that he was the proud owner of a swimming bulldog by tossing a baseball into the cove for Bruin to retrieve. Depending on your viewpoint, Byrnes either put his dog in jeopardy by forcing it to tread water wildly on national television or gave Bruin the chance to swim for freedom.

Byrnes insists he's "the best dog owner you can find," but either way, I'll bet Cesar Millan was pissed if he saw what took place. (Here's a video of Doggy Overboard, along with Ichiro's inside-the-park home run.)

Speaking of Ichiro, how fast did that dude make it around the bases? I counted 11 seconds. Maybe 12. A big arigato to Ichiro, by the way, for saving us from more of Bruin Gone Adrift.

When did Eric Karros become Mel Kiper? That is one voluminous head of hair.

I love fans who hold a grudge. I remember being at Shea Stadium in 2001 when Bobby Bonilla pinch-hit for the Cardinals, and the Mets fans booed him mercilessly throughout his entire at-bat, presumably for stealing money from their team for approximately four seasons.

Anyway, I thought it was hilarious when the San Francisco crowd booed John Lackey and Francisco Rodriguez for being on the team that beat the Giants in the 2002 World Series. Takashi Saito, Brad Penny, and Russell Martin got it too, just for being Dodgers. Beautiful.

A-Rod realizes how stupid he looked with white shoes, right? Or do you think someone told him?