You're Still the Man, Rickey!

Share All sharing options for: You're Still the Man, Rickey!

Just when I thought there might not be anything to write about until the games that count start up again, Rickey Henderson comes to the rescue. With the news that Rickey has been hired as the new hitting coach for the New York Mets, I thought I'd blow the dust off something I wrote more than two years ago after Rickey signed with the San Diego Surf Dawgs.

Most of this post will be relatively common knowledge to baseball fans, but this was for my personal blog, and people didn't seem too interested when I wrote about sports over there. Look where that got me.

But I love hearing Rickey Henderson stories, even if they're not true, and wanted to post something about them. One story that wasn't included is something I heard from Harold Reynolds about a month ago on MLB.com's Fantasy 411 show. A lot of you have probably heard this one, but it was new to me.

For a 12-year span through the 1980's and into the early 90's, Rickey owned the American League stolen base crown. The one year he didn't get it was 1987, when he played in only 95 games because of a hamstring injury. So Harold Reynolds was the final season leader with 60 steals. And after the season, he got a phone call from someone:

Awesome. Okay, let's take the Wayback Machine to 2005 for more of Rickey being Rickey.

Yesterday, 46-year-old Rickey Henderson signed with a minor-league baseball team, the San Diego Surf Dawgs, in yet another attempt to prolong his athletic career. And what a career it's been. I'd argue Henderson is one of the best baseball players I've ever seen. He could seemingly do everything on the field. He's Major League Baseball's all-time leader in career stolen bases and runs scored, holds the record for most stolen bases in a season, and had the most career walks until Barry Bonds passed him in 2001. 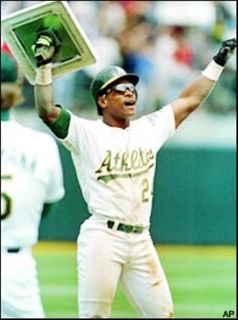 He's the greatest. Just ask him.

But Henderson is probably best known for his eccentric personality and an ego that a ballpark could barely contain. There have been some great stories attached to Henderson over the years, many of which were retold in response to yesterday's news.

Immediately after breaking Lou Brock's stolen base record, the Oakland Athletics held an on-field ceremony commemorating the occasion. Rickey ended a relatively gracious speech by saying, "Lou Brock was the symbol of great base stealing. But today, I'm the greatest of all time. Thank you."

Henderson often referred to himself in the third person. He once called the general manager of a baseball team, looking for a job, and said, "Rickey wants to play another year and he thinks he wants to play for you."

While playing for the San Diego Padres late in his career, Henderson got onto the team bus and was looking for a seat. A teammate, Steve Finley, said, "Sit anywhere you want, you got tenure."

Rickey's response? "Ten years? What are you talking about? Rickey got 16, 17 years."

This one apparently isn't true, but it's so funny that it should be: While playing for the Seattle Mariners, Rickey approached John Olerud, who wears a batting helmet on the field because of a brain aneurysm he suffered, and said "I used to play with a dude in New York who did the same thing."

Olerud's response? "That was me." Olerud and Rickey had previously played together with the New York Mets and Toronto Blue Jays.