Is Dombrowski Sending Leyland a Message?

Share All sharing options for: Is Dombrowski Sending Leyland a Message?

Taking contract negotiations to the public never seems like a good idea. Yet that's essentially what Jim Leyland did yesterday while talking to Mitch Albom on his radio show.

“I have not been extended,” Leyland told Albom, “and I’m not gonna be extended… There was some sense of an offer that I did not accept.

“I’m not afraid of anything. I want to manage the Tigers. I have every intention of managing the Tigers. I’m disappointed that I did not get an extension, but I understand — well, maybe I don’t understand, but I can live with that." 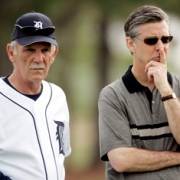 Leyland has been saying for at least a month now that he'd like a contract extension for 2010. And the conventional wisdom in sports often seems to be that a coach on the last year of his deal is a "lame duck" that will have less authority with his players. I agree with Billfer that this doesn't quite seem to apply, as Leyland isn't a manager that needs to prove himself and requires the security of a longer-term deal to show the team he has the confidence of the front office. Most of the clubhouse has played for Leyland for three years; they know what he's about.

One concern I would have regarding an extension, however, is that lame-duck status might make it difficult for Leyland to attract a top-shelf candidate for openings on his coaching staff. Would a Leo Mazzone or Rick Peterson (if those names are even being considered by Leyland and Dombrowski) come to Detroit knowing that they might only get one season to prove themselves? Sure, nothing's guaranteed as far as job status, but I imagine most coaches would prefer at least the semblance of security.

In the past, Dombrowski has said he wants Leyland to be the Tigers' manager for "an extended period." At this time last year, however, Leyland preferred to go on a year-by-year basis. Is he trying to have it both ways? Perhaps. But maybe Leyland also didn't realize until late in this season how much he wanted to come back and manage.

Yet something seems to have changed on Dombrowski's side of the equation, too. Obviously, the disappointment of this past season has to factor into this. No one expected this team to perform so badly. But it was hardly Leyland's best job as a manager (nor Dombrowski's best as a general manager, for that matter), with him being far too passive with his players early in the season when the ship was taking on water, moving players around the field only to change his mind soon thereafter, and seemingly demanding accountability only after the post-season was far out of reach. So maybe the lack of a contract extension is Dombrowski's way of holding Leyland accountable for a sub-par performance.

The curious sentence in the blockquote above, however, is "There was some sense of an offer that I did not accept." What exactly does that mean? If the "sense of an offer" was that the Tigers would extend Leyland's contract next season if it appeared that the team was playing hard for him and he was firmly in control, that seems pretty fair. You can say certain players didn't respond well to finally cashing in with big contracts, but what are you doing about that as a manager? But maybe Leyland thinks he's earned benefit of the doubt, which is why he "did not accept."

Could this develop into some friction between Leyland and Dombrowski through the off-season and into next season? Maybe it already has. Leyland's remarks seem to imply as much. But does he bring up this contract thing again or let it go, accepting that everyone has to do a better job? Of course, if the Tigers perform to expectations next year, that would likely smooth over any rough feelings.