Share All sharing options for: 20 Years Ago Yesterday, Gibby Gave Us Greatness

I'm a day late on this, but... has it really been 20 years since Kirk Gibson's home run off Dennis Eckersley?

Vin Scully's call - "High fly ball into right field... she is GONE!" - still gives me chills to this day. (Jack Buck's "I don't believe what I just saw!" is great too, capturing the sheer exuberance of the moment, but I love Scully's understated awe just a bit more.)

I know Gibby was a Los Angeles Dodger when he limped around the bases (something that still may not have looked right back in 1988), but was he still a Detroit Tiger in your heart?

Even if it was a bittersweet note, watching "our guy" in another uniform, helping his new team toward an eventual World Series victory, and perhaps making us feel something like seeing an ex-girlfriend with a new man (or ex-boyfriend with a new woman; we're equal opportunity melancholy here), did you feel great for Kirk Gibson? Did you feel envious of the Dodger fans? Did you just love baseball? 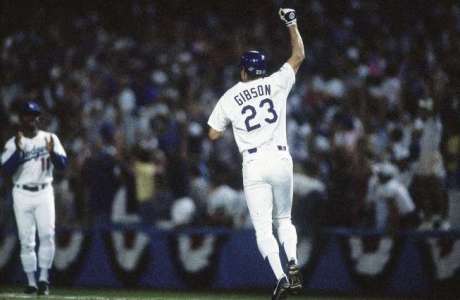 If you watched the game at the time, the anticipation building up to that moment was incredible, too. Would the guy that helped carry the Dodgers to this point, the man who eventually was awarded the National League MVP that season, be able to bite down and tell pain to go sit down while he walked to the plate to bat against the best closer in baseball?

Gibby's homer was also a testament to the vital importance of scouting, with Mel Didier's infamous advice, "Partner, as sure as I'm standing here breathing, Eckersley throws a backdoor slider on 3-2." With that in his pocket, Gibson just had to flip his bat at that pitch. How did the ball go that far with that kind of swing?

I still remember my phone ringing as soon as the Dodgers celebrated victory. It was Aaron Thompson, with whom I had a bet on the World Series, picking the Oakland Athletics to win. (Yet I'd won our previous bet, picking the Dodgers to beat the Mets in the National League Championship Series. Go figure.) "Did you just see that!" he screamed into the phone. I couldn't even be upset. I was too amazed. Ah, gambling among youth...

Former baseball commissioner A. Bartlett Giamatti once wrote of the game, "It breaks your heart. It is designed to break your heart." For the Dodgers fan, is there no more vivid example of this than remembering this great moment on the same day your team was unceremoniously eliminated from the 2008 NLCS?

Here's a look back at one of the great moments in World Series history, courtesy of MLB.com.