Share All sharing options for: Scott Boras Gets More of Gary Sheffield's Money

2008 just has not been a good year for Gary Sheffield. 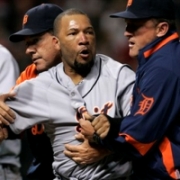 As if posting the worst numbers of his major league career (.225/.326/.400, 19 HR, 57 RBI) weren't bad enough, the guy had to endure shoulder and oblique injuries, imprisonment at designated hitter after an experiment in left field didn't work out, benchings that weren't called benchings but were really benchings, and suspensions for fighting. Heck, Sheff couldn't even get his 500th home run before this season ended, despite getting an extra chance to do it when the Tigers had to make up a rained-out game after the season with the Chicago White Sox.

Now, Sheffield can't even win against his former agent, Scott Boras. Remember back in February, when Sheff had to leave Spring Training to testify for a grievance Boras filed against him? Boras thought he deserved to be paid for negotiating Sheff out of a contract option, allowing him to become a free agent and sign a $39 million deal with the New York Yankees. (Sheff signed that contract after firing Boras.) They've been fighting over that ever since, with Sheff promising that "it ain't going to be pretty."

Well, Sheffield was right. Except that it's not pretty for his bank account. An arbitrator ruled yesterday that Sheffield owes Boras $550,000 (or five percent of that $11 million contract option).

Considering that Boras was originally seeking commission for the entire $39 million Sheff negotiated with the Yankees, maybe that's still something of a victory. If he wanted to, I suppose Sheff could still claim that he's someone "you don't want to mess with." Sticking to those principles can sometimes be expensive, apparently.