Kenny Rogers Might Not Know When to Fold 'Em 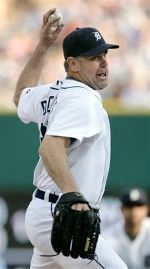 Toward the end of this past season, there were some mixed signals surrounding Kenny Rogers. The conventional wisdom said that he would retire after the 2008 season was finished, a conclusion that looked all but certain after the Tigers took him out of the starting rotation (at his request) and shut him down with about two weeks remaining on the schedule.

Yet as October approached, Rogers didn't sound like a guy ready to hang 'em up. Not only might he be interested in coming back, but if he did, he wanted to pitch for the Tigers. Rogers didn't officially announce his retirement, nor did the Tigers hold a press conference and ceremony for him, as they did with Todd Jones.

Now, with the off-season about to kick off following the conclusion of the World Series, should the Tigers factor Rogers into their plans for 2009?

He told the Freep's Jon Paul Morosi that his arm felt stronger this year than at many other points throughout his career, and that the hip injury which gave him trouble at the end of season had healed him. Rogers also acknowledged that he has to rediscover the sinker he lost. But he sounds pretty confident of his chances.

Later, he added, "I know I can pitch. I could go out and have a great year next year. It can happen."

Morosi speculates that another motivating factor for Rogers is the disappointment of 2008, both from a personal and team standpoint.

So if Rogers wants to come back, is there a spot for him? Can the Tigers really count on him in their starting rotation when he hasn't been healthy for the past two seasons? He did pitch in 30 starts last year, so perhaps he could fill out the back of the rotation nicely. Or would Rogers actually help the Tigers more in the bullpen?

If he comes back, it would be at a lower salary than the $8 million Detroit paid last year. But how low would Rogers be willing to go? Morosi throws $2 million with incentives out there. If he agreed to those terms, should the Tigers say they have a deal? Or is it time to move on for both sides?