Share All sharing options for: So Long, Virgil Vasquez 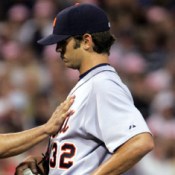 If Virgil Vasquez makes it back to the majors, it won't be with the Detroit Tigers. The Tigers put him on waivers to take him off of their 40-man roster, and he was claimed by the Boston Red Sox today.

But really, Vasquez's career with Detroit was probably over, anyway. The Tigers needed starting pitching help frequently this season, yet Vasquez never even sniffed the majors after getting three starts in 2007. Instead, guys like Eddie Bonine and Chris Lambert (and Armando Galarraga before them) got the call up from Toledo.

As Billfer wonders, is this a tip toward a move to be made shortly after the conclusion of the World Series (whenever that is)? Or is Dave Dombrowski just getting his house in order before attacking the off-season?

Had Vasquez ended up clearing waivers, Jason Beck reports, he would've been outrighted back to Triple-A Toledo.