Should the Tigers Seek 'Tek Support at Catcher?

Share All sharing options for: Should the Tigers Seek 'Tek Support at Catcher? 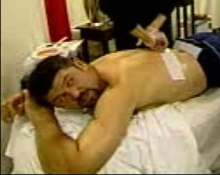 While recording the latest episode of The Detroit Tigers Podcast with Mike McClary (soon to be posted), we talked about potential free agents the Detroit Tigers might be interested in signing. Inevitably, Jason Varitek's name came up, as he was mentioned in Lynn Henning's article for the Detroit News on Tuesday.

As we know, the Tigers are in need of a veteran catcher, but is this a direction they should go in? Henning's big concern about signing Varitek seemed to be that he'd cost the Tigers a draft pick, being a Type A free agent, according to Detroit Tigers Thoughts. But shouldn't his clearly deteriorating skills also raise some eyebrows?

Varitek batted .220/.313/.359, with 13 home runs and 43 RBI in 131 games for the Red Sox last season. (You may begin jokes about a .220 average being a vast improvement over Brandon Inge's .205 now. However, Inge was actually better in Runs Created than Varitek.) But he would provide a left-handed bat, which is something the Tigers seem to covet in a veteran to platoon with Dusty Ryan, and that looks to be in short supply around baseball. However, Varitek hit much better as a right-hander against lefty pitching.

Defensively, he's still pretty good at throwing out basestealers, and is much better (especially in comparison to Inge) at blocking wild pitches and not allowing passed balls. And if you believe that a pitching staff's ERA reflects well on a catcher (I don't necessarily subscribe to that belief), Varitek had the best in the American League at 3.66. (Only Russell Martin's 3.63 for the Dodgers was better in the majors.)

Varitek would have to take a much lesser salary with the Tigers, as he made $9 million with Boston last year. I'd also be concerned that Jim Leyland would increasingly favor Varitek's veteran presence behind the plate at the cost of Ryan's development as a catcher. (Of course, Varitek would likely play more as the left-handed side of a platoon.)

If Varitek still thinks he can be a major-league starting catcher, playing 130+ games behind the plate, Detroit probably isn't the place for him and the Tigers should look elsewhere? But what if he was willing to be something of a part-time player, a mentor to Ryan and the Tigers' pitching staff? What if he was willing to sign for, say, $2 million? Or maybe $3 million? Is that something you'd be interested in? The number of years Varitek would want on a contract is another concern to consider.

Just before I become intrigued by this idea (as I did on the DTP), let's consult our friend Samela Samara, who we have to consider something of an authority on this subject, had some thoughts to share today at Roar of the Tigers:

I don't know what catcher we'd pick up-- we've talked about this before-- but I'm gonna say right now that Jason Varitek is not the answer, and anyone who seriously talks about Varitek as the answer to the Tigers' problems behind the plate is stuffing their face with pure sugary crazysauce. I know that he's a Leader and a Captain and a Clubhouse Studmuffin and a Pitcher Whisperer, but the Sox were leaving Kevin Cash in games to take at-bats even after the knuckleballer had been pulled by the end of the season. KEVIN CASH. I love Tek, as a Red Sox fan I am contractually obliged to love Tek, but really, no.

Okay, Sam probably talked me down with that. And perhaps rightly so. Although I'm really only mildly intrigued by the possibility.

How about the rest of you?