Edgar Renteria is Cast Away; Will He Drift Back?

Share All sharing options for: Edgar Renteria is Cast Away; Will He Drift Back? 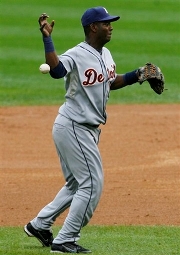 What a difference a year makes. 365 days ago, after the conclusion of the World Series, the Detroit Tigers acquired shortstop Edgar Renteria from the Atlanta Braves. There was excitement in Tiger Town. Hope.

Remember those feelings? Before they were replaced by frustration and disappointment?

Today, the Tigers officially declined the option year on Renteria's contract, which would've paid him $12 million. Instead, Detroit will pay the $3 million buyout, thus making Renteria a free agent. These proceedings were really just a formality, however, as Dave Dombrowski announced his intention to do this a month ago.

Renteria finished the 2008 season with a.270/.317/.382 average, along with 10 home runs and 55 RBIs. Those were his lowest numbers in seven years. His 16 errors at shortstop were also his highest total in the last three seasons.

Does this mean that the Tigers and Renteria are officially done with each other? Well, probably. But not certainly. If the Tigers off-season shopping doesn't turn up any viable alternatives at shortstop, and Renteria can't find himself a gig that fits him as well as the one he had in Detroit, both sides could end up reuniting later this winter. At a much lower price than $12 million, of course.

Both sides seem ready to move on, however, according to Renteria's agent, Barry Meister:

"I think Edgar's going to kind of point himself in a different direction," Meister said.

The Tigers have exclusive negotiating rights with Renteria for the next couple of weeks, but the team hasn't contacted Renteria, nor has Mr. Meister attempted any negotiations for a new contract. But it could still happen. Detroit already brought back one guy they kicked to the curb a month ago.

Two other players who will become free agents are pitcher Gary Glover (1-1, 4.43) and catcher Dane Sardinha (.159/.229/.205). Both were outrighted to Triple-A Toledo, but refused those assignments, thus putting them on the open market.