Share All sharing options for: Freddy Files for Free Agency 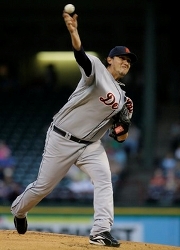 With the conclusion of the World Series this week, eligible players can now file for free agency, and the first of the Detroit Tigers to do so was pitcher Freddy Garcia. (Unless you consider Edgar Renteria the first to hit the open market, after the Tigers declined his $12 million contract option.)

Garcia's decision is really just a formality, however, as this was the agreement he and the Tigers reached when he signed a minor-league deal with the team in mid-August. It was a low-risk transaction for both sides, with Garcia getting to prove that he was major-league ready and the Tigers having an opportunity to show that Detroit could be a long-term home.

Since leaving his last start of the season with a tight neck/strained shoulder, Garcia hasn't thrown a baseball from a mound, which is behind schedule from where he hoped to be at this point. He intends to pitch winter ball in Venezuela.

If Garcia is able to show that he's healthy sometime in early-to-mid-November, there could be plenty of interest in him. Before he signed with the Tigers, as many as 12 teams inquired as to his health. With this setback, however, perhaps some clubs will look elsewhere and the Tigers might benefit from giving Garcia a shot back in August. And as their free agent, the Tigers will have a two-week exclusive negotiating window with him.

Detroit's definitely in need of a back-of-the-rotation starter, at minimum, and Garcia seemed to show that he could fill that role nicely for the team. In three starts with the Tigers this past season, Garcia compiled a 1-1 record and 4.20 ERA, with 12 strikeouts and six walks in 15 innings.

Besides Garcia and Renteria (and the now-retired Todd Jones), Kenny Rogers, Casey Fossum, Kyle Farnsworth, and Vance Wilson are also eligible to file for free agency.