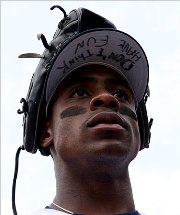 I still haven't taken much of an opportunity to watch the playoffs, while shaking off the hangover from the past season, but I plan on changing that tonight with the beginning of the Dodgers-Phillies NLCS.

Unfortunately, that series will be on FOX, so we won't get to see Curtis Granderson trade analysis with Cal Ripken and Dennis Eckersley this evening, but we'll get the TBS side of things tomorrow night, with Game 1 of the Red Sox-Rays ALCS.

For the second consecutive postseason, Granderson is drawing much praise for his smooth on-camera demeanor and insight into the game. Over at MLive.com, Steve Kornacki profiles Granderson and his TV work, which seems to assure him of a prosperous career once his playing days are over. One of Grandy's producers at Turner Sports, Tim Kiely, compares him to another analyst who's made quite a name for himself over at TNT:

"There are a lot of ways to critique without ripping guys," Kiely said, "and he knows how to handle himself there. He's able to paint a picture and reminds me of Kenny Smith, who does our NBA studio and gets over-shadowed by Charles Barkley. Hey, everybody gets overshadowed by Charles."

Unlike last year, Granderson has a larger role on the studio broadcast and thus won't be moving over to ESPN once TBS's postseason coverage ends with the conclusion of the NLCS.

Big League Stew has an interview with Granderson's fellow TBS analyst, Dennis Eckersley, and says it plans to talk to each member of the "Inside MLB" crew, so look for a Q & A with Curtis in the days to come.