Could a Tiger Killer Return to the AL Central?

Share All sharing options for: Could a Tiger Killer Return to the AL Central? 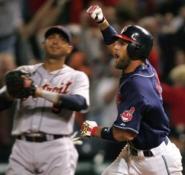 Watch out, Detroit: a certified Tiger Killer might be returning to the AL Central.

Casey Blake, traded by the Cleveland Indians to the Los Angeles Dodgers in late July, thus mercifully sparing the Tigers from another 10 games in which he could've vanquished them single-handedly, is being pursued by the Minnesota Twins.

The Twins want to upgrade at third base, and it appears that they're zeroing in on Blake or the Rockies' Garrett Atkins. Though both players put up relatively similar statistics last year, it seems pretty clear who would strike more fear in the hearts of Tiger Town. And don't the Twins already cause the Tigers enough problems?

Just in case you've forgotten how lethal Blake has been against Detroit, here are the numbers: In 390 plate appearances, he's hit .295/.390/.557 with 22 home runs and 51 RBIs. He's homered more against the Tigers than any other opponent, and only driven in more runs versus the Royals.

Could we put together an all-star team of Tiger Killers? I have some ideas, but don't want to take away from any suggestions. The comments are yours.