Share All sharing options for: Treanor For Back-Up Catcher? 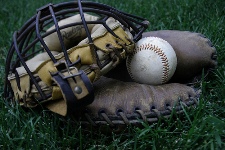 With the Detroit Tigers facing an increasingly shrinking closer market, I realize that back-up catchers might not be an especially compelling topic. But in the wake of acquiring Gerald Laird this week, Tigers GM Dave Dombrowski mentioned that Dusty Ryan would "ideally" be the starting catcher in Triple-A Toledo next season.

With that, Dombrowski seemed to imply that he hoped to find a suitable reserve catcher. (Right now, we're looking at Dane Sardinha for that position.) And a decent one is now available. The Florida Marlins released Matt Treanor last night, most likely to clear a spot for whomever the team selects in today's Rule 5 draft.

Rumors had the Tigers linked with Treanor earlier this offseason, as a possible addition to a Jack Wilson trade package. Of course, that would've been contingent upon the Pirates first getting Treanor from the Marlins. This also raised the question of whether or not a catcher who averaged 67 starts a season (and also recovering from hip surgery) might somehow be the Tigers' starter behind the plate, or if he might back up Ryan.

Obviously, both of those questions are moot now. Laird is the Tigers' starting catcher. But if the Tigers were eyeing Treanor as an understudy, he's there for the signing. This year, he made $700,000.