Share All sharing options for: The Quest For Relief Ponders Derrick Turnbow 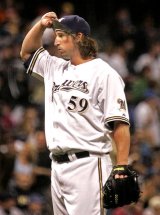 If you're beginning to fret a bit over the Detroit Tigers' lack of movement toward signing a reliever for next season, the following news probably isn't going to set you at ease. After reporting last week that the Tigers had contacted Derrick Turnbow, the Freep's Jon Paul Morosi follows up with news that the team called the pitcher's agent to "reaffirm" its interest and has asked for medical records to review.

A handful of teams - which may include the Phillies, Marlins, Pirates, Rays, and Rangers - have already offered Turnbow a contract, with possibly more to come. No word on whether or not the Tigers have made an offer yet, but if they're serious about signing him, they'll probably need to pony up a deal.

Does this interest indicate that most clubs believe Turnbow is healthy and can make a meaningful contribution? Or does it reflect how thin the market is for relievers right now?

Turnbow is coming off a season in which he pitched only 6.3 innings while battling shoulder problems that his agent termed "muscular imbalance and weakness." Check out this quote describingTurnbow's struggles and see if it gives you an uneasy feeling:

He lost total control of his pitches, Lapa said. One would be 97 miles per hour, on the black. The next would be 91, up and away.

Oh, man. Didn't we go through enough of that already this past season?

Turnbow was actually diagnosed with a slight tear of his labrum in late July. But surgery wasn't required on the injury, and Turnbow is reportedly already on a throwing program which should have him ready by Spring Training. And if he's healthy, Turnbow is a guy who can throw some strikeouts (almost 10 per nine innings over his career) out of the bullpen. Those will come with some walks, however (almost six per nine innings), however, which could give Jim Leyland some cranky nights.

But for, say, a minor-league deal, Turnbow might be worth a shot. Maybe Rick Knapp can straighten him out. The only problem is that one of the teams interested in him has already offered a major league deal. And with that, Turnbow will likely decide which team to sign with before Christmas.

Just imagine if the Tigers' bullpen has Turnbow and Joe Beimel, to go along with Magglio Ordonez next season. Locks could be a-floppin' generously at Comerica Park next summer.