According to this morning's Pittsburgh Post-Gazette, Pirates shortstop Jack Wilson is willing to renegotiate the remaining two years of his contract if it helped move along a trade to the Los Angeles Dodgers. Wilson is due to be paid $7.25 million next season, with a club option for $8.4 million in 2010 (or $600,000 buyout). However, the Dodgers would reportedly be willing to give Wilson two guaranteed years at approximately $12 million. 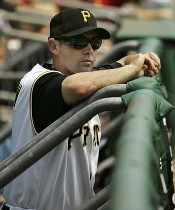 Would Wilson agree to similar terms with the Detroit Tigers? (That is, if the Tigers wanted such an arrangement.) Perhaps, but as a southern California native, a trade to the Dodgers might mean just a bit more to him.

The question still remains as to what offer the Tigers made on Wednesday night that ignited these trade rumors again. Beat writer Dejan Kovacevic heard from a source that the Pirates were scouting Jeff Larish in the Arizona Fall League, but there's no confirmation as to whether or not he was part of a potential trade package.

But if you'd like a ticket to Crazy Town, check out the rumors that were flying in the MLB Trade Rumors comments thread last night. Maybe we shouldn't even address this, considering the source, but one of the posters claimed to hear a report from a local Pittsburgh newscast saying that the Tigers would be willing to trade "its top pitching prospect" if the Pirates picked up "almost all" of Wilson's salary.

There's really only one name that could be associated with the words "top pitching prospect" when it comes to the Tigers. And Dave Dombrowski couldn't possibly be willing to deal Rick Porcello for Wilson. That would be insanity.