Tigers to Meet Everett in Vegas

Share All sharing options for: Tigers to Meet Everett in Vegas 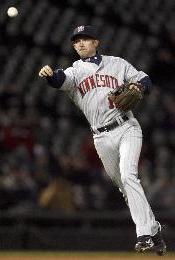 Dave Dombrowski told the NY Daily News' Jesse Spector that the Detroit Tigers would "go right to business" when they arrive in Las Vegas for baseball's Winter Meetings, and part of their itinerary has already been planned.

The Tigers have been in contact with representatives for shortstop Adam Everett, engaging in "preliminary" talks about a contract. But next week, the Tigers and Everett's people will sit down and see if they can do business with each other.

Everett has a reputation as a stellar defender, one who would presumably bring an even better glove than Jack Wilson would. But he's never hit very much. We're talking a career average of .246/.298/.355. As Billfer mentioned on his debut ustream.tv broadcast (and if you missed it, the archive can be viewed at The Detroit Tigers Weblog), a healthy Everett plays such good defense that it doesn't matter what he'd hit.

The question, however, is whether or not Everett's throwing shoulder is shot after an injury this past season. But Jason Beck talked to Everett's agent, who said that the shoulder is completely healed and his client is working out at home. (Of course, what else would he say?)

Likely speaking up for Everett, as mentioned in previous reports, is Tigers third-base coach Gene Lamont, who was on the Houston coaching staff when Everett joined the Astros in 2002.

Everett has made $2.8 million the past two seasons, with Houston and Minnesota, respectively. And it's difficult to imagine he'd be paid much more than that by a new team, given his inability to stay healthy over these last two years. Maybe he'd even make less in base salary, with incentives that could give him a raise. Either way, it'd be less than half of what Wilson is owed next season.