Gerald Laird is Coming to Detroit

Share All sharing options for: Gerald Laird is Coming to Detroit 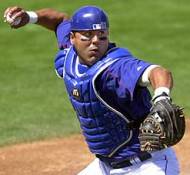 While you were sleeping (or while I was, anyway), the Detroit Tigers put a big checkmark on their offseason shopping list and finalized a trade with the Texas Rangers for catcher Gerald Laird. Going to the Rangers in exchange are pitching prospects Guillermo Moscoso and Carlos Melo. The trade is expected to be officially announced this morning.

As of last night, the Freep's Jon Paul Morosi said that a deal was close to happening, with Moscoso agreed upon and another pitching prospect to be named. A few hours later, Ken Rosenthal reported that the deal was official, and Melo was revealed to be the second player going to Texas.

So Detroit now has itself a starting catcher, one who can provide some stability behind the plate until Dusty Ryan, James Skelton, or Alex Avila develop into major league-ready players. Laird's hitting numbers won't make you sit up, with a .276/.329/.398 average to go with six home runs and 41 RBIs. But he'll give the Tiger some good defense, which they'd placed at a premium in a new catcher. Laird threw out 27.4% of opposing basestealers this year, and was one of the better catchers in the American League at blocking balls, something Pudge Rodriguez and Brandon Inge were horrible with.

Moscoso ended the year in Double-A, finishing his overall season with a 5-4 record and 2.70 ERA. But the numbers that made people take notice were the 122 strikeouts in 86.2 innings. At 25 years old, some think Moscoso is perhaps a bit too old to be considered a top prospect, but the Tigers thought he was capable of contributing to the major league team by the end of next season.

Melo is just 17 years old, having pitched this season for the Tigers' Dominican League team. In 49 innings, he compiled a 5-5 record, 5.14 ERA, and 61 strikeouts.

I imagine there are some Tigers fans who won't like to see young pitching given up for what could be seen as an average catcher (and such comments have already been posted here). But the catching market in free agency was hardly impressive, so to get someone relatively young (Laird is 29) but experienced, and also a good defender, was going to cost something. The Rangers have been nursing a catching surplus for a couple of years now, so they were the team to target, and a deal would only get done by offering pitching.

The market also seemed to work in Detroit's favor, as Texas was originally seeking a major league-ready pitcher, but perhaps found themselves needing to shed an arbitration-eligible player due to earn approximately $2 million next season. The Rangers had to trade at least one of their catchers this winter, and with the Red Sox preferring one of their younger prospects, such as Jarrod Saltalamacchia or Max Ramirez, and the Reds seemingly unwilling to part with young pitching, the Tigers became the market for Laird.

I give this one the BYB stamp of approval, but the comments await your input. Do you like this deal or was Laird not worth what the Tigers gave up? Sound off.