Can Inge Be More Than a Fringe Hitter?

Share All sharing options for: Can Inge Be More Than a Fringe Hitter? 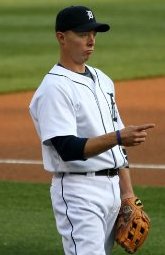 One of the worries in adding Adam Everett's pop-gun bat to the lineup (and to a lesser extent, Gerald Laird's "league average" hitting) is that he'll join Brandon Inge to help create a lower third of the batting order that could be, well, offensive, but not in terms of generating hits or runs.

With the exception of one season (.273 in 2004), however, Everett has never hit much. He is what he is, as we like to say these days. Maybe that applies to Inge, as well, though he at least has the notable spike of 2006 in which he posted 21 home runs and 83 RBIs. But in trying to match those numbers in the two seasons since, his hitting has suffered greatly.

Perhaps this season's .205/.303/.369 can be partially blamed on the mental burdens of catching. Inge seemed to have turned himself around in Spring Training, but maybe boosting his potential trade value when he was a man without a position played into that. Once the regular season began, however, the hitting approach looked all too familiar.

Regardless, especially now that he'll be back at third base, Inge needs to boost his numbers at the plate, and Tigers manager Jim Leyland shared some thoughts on that yesterday with the Detroit News' Lynn Henning:

"What I think, personally, is the key," said Leyland, "is that we've got to get him away from thinking about going totally to the opposite field, and also from totally thinking about home runs.

"He tried his soul off trying to go to the opposite field," Leyland said of Inge's more recent attempts to change his approach. "We've got to be able to explain to him through Lloyd (McClendon, hitting coach) that we need more situational hitting. He's been all or nothing. There's a happy medium there."

Trying to hit the ball to right field was part of the problem? Interesting. It certainly looked like Inge's problem was trying to pull everything and jack the ball out of the park. But I suppose it stands to reason that if you're trying too hard to do one thing, you might overcompensate and throw that swing and timing out of whack. Maybe when Inge was told to hit to the opposite field, he interpreted that as taking a George Costanza "opposite" approach. (Hey, that did get George a job with the Yankees!)

McClendon might also need to change how he coaches Inge. (And we know the two haven't gotten along in the past.) Perhaps a more "up-the-middle" philosophy will be the key to success in 2009.