The Quest For Relief: Closers Are Costly

Share All sharing options for: The Quest For Relief: Closers Are Costly

Now that the Detroit Tigers have shored up their up-the-middle defense for the 2009 season by nabbing a catcher and shortstop, general manager Dave Dombrowski can focus on the most expensive item on his offseason shopping list: The closer.

Interest in free agent Kerry Wood seems to be between the Tigers and New York Mets. However, several reports out of Las Vegas say the Mets have zeroed in on Francisco Rodriguez, and after making an initial offer of a two-year, $24 million contract with a vesting option for a third year, it appears that the two sides have agreed on a three-year, $37 million deal that SI.com's Jon Heyman hears is "going to get done." So not only would this eliminate some competition for the Tigers, but the market for closers would finally be set.

However, Yahoo! Sports' Gordon Edes says the Boston Red Sox might be a surprise suitor for Wood, eyeing him as a set-up man for Jonathan Papelbon. 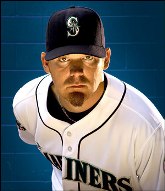 The other option that's generating heat is a trade for Seattle's J.J. Putz. According to the Seattle Times' Geoff Baker, the Tigers have been the most aggressive team in trying to make a deal. (And we've seen over the past 36 hours what can happen when Dombrowski gets aggressive.) Putz would be cheaper than Wood in terms of dollars ($5 million next season, and a club option for $8.6 million in 2010), but he could cost Detroit some of its best young players.

Seattle's largest need is for a left fielder, which would seem to make Matt Joyce their trade target. Jeff Larish is also mentioned as a possibility, and the Mariners also have an opening at first base that he could fill. (Though they also just signed Russell Branyan and former Tiger Chris Shelton, who will surely compete for that spot.) Baker even mentioned Brent Clevlen as a possibility.

But could the Mariners want it all, so to speak? Check out what Jon Paul Morosi reported in the Freep:

Seattle officials believe they will be able to obtain a three-player package in exchange for Putz. For Detroit, that could mean parting with young left-handed hitters Matt Joyce and Jeff Larish, along with a big-league-ready pitcher.

That pitcher, by the way, would likely be Double-A prospect Luis Marte, who posted a 7-7 record and 3.76 ERA, with 78 strikeouts in 103 innings.

So Joyce, Larish, and Marte for a guy coming off an injury-plagued (torso inflammation, hyper-extended right elbow) season in which he pitched just 46 innings and earned 15 saves? Who is he, Jack Wilson? Putz was an elite closer in 2006 and 2007, accumulating 76 saves and 186 strikeouts (vs. 26 walks) in 150 innings. But is it worth wiping out what youth the roster has - not to mention yet another pitching prospect, which would make 11 total over the past three winters - for potentially just one season of Putz?

Didn't we learn anything from the Edgar Renteria trade?

The closer market is too loaded to give up such a haul, even if the Tigers might have to pay more than they'd prefer for Wood. Or perhaps Fuentes, if he becomes available and more affordable in lieu of a Mets/K-Rod pairing. (Additionally, Detroit is one of five teams that will be talking to Chad Cordero.) New Mariners GM Jack Zduriencik is probably looking at Putz to make his first offseason a memorable one. But it shouldn't happen at the expense of the Tigers' future.