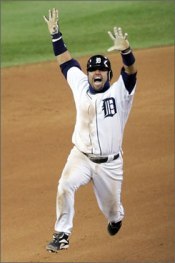 I feel like tonight's recap could almost be a recap of last night's. Two previously injured and slumping batters continued their resurgence. And a struggling starting pitcher threw the sort of game that should hush any questions and doubts.

Not that this game played out in exactly the same way. For one thing, Jeremy Bonderman pitched deeper into the game than Kenny Rogers did last night, giving the bullpen a break on a night when they were one reliever short (thanks to the Jason Grilli trade). And he did it throwing 10 fewer pitches than he did in 4 2/3 innings last week.

But ¿quien es mas macho? Bondo or Placido Polanco? Could the Tigers really lose a game in which a guy not known for his power hit two home runs? And in a ballpark whose dimensions make it tougher for right-handed hitters to reach the seats? Had I not watched the game, I'm not sure I would've believed the box score. Along came Polly, jacking two pitches over the left field fence. Do we think this guy's slump is over? Polanco's hit 6-for-10 against Yankees pitching the last two nights.

Others Who Get to Roar: