Besides the recent posts by Billfer and Lee regarding Jeremy Bonderman's struggles, my arch-enemy Samara expressed major concern over Bondo's apparent attempt to grow a mustache. I missed Saturday's game, so didn't see the growth above Bondo's upper lip. But I can see why some might believe it had an adverse affect on his performance that day. 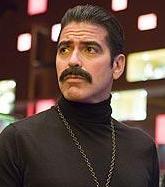 I have a bit of a different take on the subject, however. If Bondo is really going to grow a mustache (which is presuming that he's indeed capable of sprouting a representative strip of hair on his face), then he should really follow through on the effort and try to own it. Baseball is full of great mustaches. Goose Gossage, Rollie Fingers, Al Hrabosky are but a few of them. Bondo needs look no further than to his left in the Tigers clubhouse, where Todd Jones sports a 'stache that leaves opposing lineups shivering. (That is, until those hitters realize that Jonesy can't strike them out and begin to tee off.)

The vultures seem to be circling around the next scapegoat for the Tigers' troubles. Kind of like a boxer dancing and shuffling around the ring, sizing up his opponent before cocking his arm and letting a punch fly. Pitching coach Chuck Hernandez appears to be the next target of booing and disdain from Tiger Town, and Kurt looks at whether or not that's warranted over at Mack Avenue Tigers.

If you're like Mike McClary and currently grappling with buyer's remorse over the Miguel Cabrera deal, you might not want to read this Toledo Blade profile of Burke Badenhop, one of the pitchers the Tigers traded to Florida in return.

Dan Berlin of sportsnet.ca thinks Justin Verlander should consider talking to Roy Halladay about struggling in the third year of a major league pitching career. Halladay was throwing so badly (4-7, 10.64 the previous season) that the Blue Jays sent him down to Single-A to pull himself together. One interesting difference between the two is that Halladay fixed himself by lowering his arm angle, while Verlander seems to have improved after raising his.

If you haven't already read this NY Times article on Tiger Stadium's demolition battle, there's a quote from the New York Mets' chief operating officer, Jeff Wilpon, who so loved the old right field overhang that he insisted it be part of the Mets' new ballpark. I've written about this before , but it drives me crazy that people in other cities valued the quirks of Tiger Stadium more than the Tigers themselves did when John McHale, Jr. and company designed Comerica Park.

Remember when Michael Young's five-year, $80 million contract with the Texas Rangers suddenly set the market for shortstops, including Carlos Guillen? Isn't it interesting that by next year, neither of those two guys could be playing shortstop?

Where do you lean on the resentment scale when you see how well Troy Percival is pitching these days? He has nine saves, a 1.93 ERA, and 13 strikeouts in 14 innings for those pesky Tampa Bay Rays. Or maybe you're bigger than that, and don't begrudge Percival for collecting $12 million for 25 innings of work from 2005-2006. Injuries happen, after all. And his Tigers teammates thought enough of him to vote him a AL championship ring and full playoff share in '06.