Share All sharing options for: We're Entering a World of Pain: Royals 2, Tigers 0 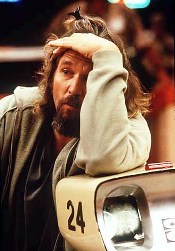 I was ready to begin this recap with a picture depicting rage, because it's infuriating to see this Tigers lineup unable to push a single run across the board. But since we had something of a Big Lebowski theme going on in tonight's GameThread, we have The Dude. And he minds. This will not stand, man.

I don't know how Justin Verlander didn't absolutely erupt in the dugout when he left the game down 2-0, giving up just six hits. (And the big hit, if you even want to call it that, was a single that Joey Gathright flipped over a drawn-in Carlos Guillen at third base.) Maybe that's called being a professional. I think some Gatorade barrels, space heaters, and baseball bats should've been fearing for their lives.

To revise a point I posted before tonight's game , the Detroit Tigers have scored just four runs in Verlander's last four starts. Four runs. Total. No starting pitcher is going to overcome such an utter lack of offense. It's obscene for Verlander to be dragging along a 1-7 record. No way is he pitching that badly. I don't know how his teammates can look him in the eye right now. At the very least, somebody in the Tigers' clubhouse should be taking him to Arthur Bryant's for some barbecue. Let him mask the pain with a pulled pork-induced food coma.

And chew on this: This is the sixth time the Tigers have been shut out in 40 games. Some runs would really tie this team together. Luke Hochevar is good, but Detroit made him look like an ace tonight. Four base hits. All singles. That's all the Tigers could manage. The bums will always lose.

Well, despite the result, we had some fun in the comments tonight. And we have The Big Lebowski to thank for it. Who do we blame for that, by the way? rock n rye? (Apologies to those who hadn't seen the movie and left to wonder what the hell we were talking about. Hey, you could rent it for Monday's off-day.)