Will This Be Getting Any Better?

Share All sharing options for: Will This Be Getting Any Better?

I'm not writing a recap of whatever that thing was the Tigers did at Kauffman Stadium today. Just so you know. Earlier this evening, I told myself that maybe I should write a recap because a lot of people probably didn't get to see the game while at work. But here's the thing: I didn't watch much of it either. Not once I saw the Tigers fall behind 3-0 in the first inning. And once I saw the final score, I was not about to put myself through that - even if I could whiz through the commercials, DVR-style.

After two games in which Detroit received the sort of starting pitching that should've resulted in two wins, if not for an inexplicable lack of offense, Kenny Rogers just crumbled out there today. Maybe the weight of having to carry the pitching staff - a burden he's hardly suited for anymore - finally broke him. Or maybe he figured that he wouldn't get any run support today, anyway, so why not just chuck the ball up there and see what happens?

Seven Royals runs on 11 hits is what happened. In four innings. To a Kansas City lineup that had Alex Gordon, Mark Grudzielanek, and David DeJesus on the bench. But I'm not writing a recap. 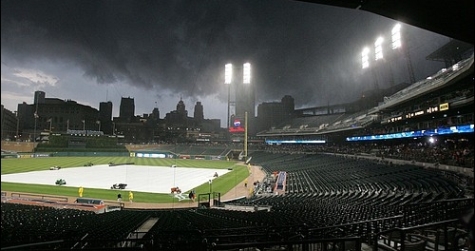 So what are we talking about here? The Detroit Tigers, the team that generated so much hope and excitement for us throughout the winter and spring, are now nine games under .500. They were seven games under when Tigers fans began pulling their hair, ran into the streets screaming, and contemplated ledges and bridges to jump from. Some of us suddenly felt major doubt. Others wondered if it was now horrifyingly apparent that this team had made some major mistakes in player acquisitions. And the Tigers haven't gotten any better since then. Record-wise, they're now worse. Are any of these guys your Tiger right now?

I actually get to take a break from this team for two weeks, traveling to a part of Malaysia that I'm told is about as "off the grid" as it gets. If only I could take the rest of you with me so that you could also detox from the poisonous baseball Detroit has been subjected to over the past seven weeks. Unless, of course, the Tigers suddenly start working and play like they're actually interested in winning some baseball games.

And doesn't this ultimately fall on the players? There haven't been a lot of "Fire Leyland" grumblings here at BYB, and I'd like to think it's because we're a bit more rational than that. But it's not like it's a subject that absolutely can't be addressed. Do I question how hard Leyland's guys are playing for him? Yes, I do, and I also think that reflects poorly on him. But raise your hand if you think Gene Lamont or Lloyd McClendon managing this team makes it any better. Maybe Leyland has become a victim of the Tigers' sudden, unexpected success over the past two seasons. At times, he almost seems like he's managing out of fear, tentatively poking here and there to see just how much he can push his veteran players. That's not how Leyland managed in 2006. He was aggressive. He was decisive.

Look at the Gary Sheffield situation. The dilemma over what to do about the guy with the bum shoulder has Leyland totally flummoxed. How does he get Sheffield going? Does he play Sheff in the field? Does he give Sheff more time off? But what if Sheff loses his timing? And what if Sheff causes more damage to his shoulder? Why doesn't he just put Sheff on the disabled list, like he did to Nate Robertson last year with the "tired arm"? I think Leyland could make a pretty convincing case that Sheffield has a "tired shoulder." No quotation marks necessary.

But when a guy set to be paid $28 million over the next two years says he can play, and the training staff says resting the shoulder won't make much of a difference, what can Leyland really do? The obvious answer is to put him on the DL, and start playing those who can bring some energy - and some production. But the Tigers very likely won't release Sheffield, unless there's some kind of buyout arrangement in his contract. And trading him? Shall we return to the days of "You try to trade him!" challenges from Dave Dombrowski? Leyland and Dombrowski can't wield that kind of hammer with this roster anymore. They're all signed long-term, and for big money. They've already cut the one player they could cut. And Jacque Jones will probably begin playing for the Florida Marlins next week.

Should Leyland start using the bench as more of a weapon? But if he sits Miguel Cabrera, for example, because he thinks Cabrera isn't focusing on his at-bats seriously enough, do you risk losing a player that might already be putting too much pressure on himself to perform? I don't mean to single out Cabrera, because he is hardly the only reason the Tigers aren't playing up to expectations, but it's easy for us to say that he's loafing it because he finally cashed in with a big contract. As a manager, when or how do you make that call - especially if you haven't coached that player before?

But stuff like this is why Leyland gets to sit in the big manager's chair. It's his job to figure out his team and how to get it to play better. And if he can't, that's something the Tigers will certainly have to deal with. But will it come to that during this season or afterwards?