Share All sharing options for: Flexing Some Muscle: Tigers 8, Yankees 4

I thought about going with a picture of a broom tonight. And it would certainly be appropriate with the Tigers finishing off a sweep (the word I just couldn't say earlier tonight) at Yankee Stadium, something they haven't done in 42 years. 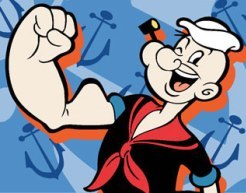 But I'm going with Popeye flexing here, because the hometown nine showed off some impressive muscle this evening, giving Nate Robertson the type of run support he hasn't typically received during his Tigers career. And Nate needed the help after a rough first inning. But much like Jeremy Bonderman did last night, Robertson pulled himself together and kept the Tigers in the game until they could bring the thunder.

That came in the third inning when Detroit's bats finally caught up to what Ian Kennedy was serving, began hitting him hard to the opposite field, and sent Bobby Abreu backpedaling and spinning around. Magglio Ordonez barely missed a home run, settling for a double, while Miguel Cabrera tripled, bringing in a combined three runs. In Cabrera's case, that drive to right field was merely a preview of deeper blasts to come.

Maybe the most unexpected muscle, however, came from the substitute shortstop. With a career average of .234/.299/.313, we know that Ramon Santiago stays in the major leagues because of his glove. But so far this year, when he's been able to get a few at-bats in a game this season, Santiago is swinging a strong stick, too. He went 2-for-4 tonight, and stroked the biggest hit of the night with a sixth-inning triple to the right-center gap that brought in the two decisive runs. Somebody's eating his spinach. And he now has a .375 batting average to show for it.

Cabrera finished off the gun show with a two-run homer in the seventh, pushing the Tigers to their best showing in the Bronx since 1966.