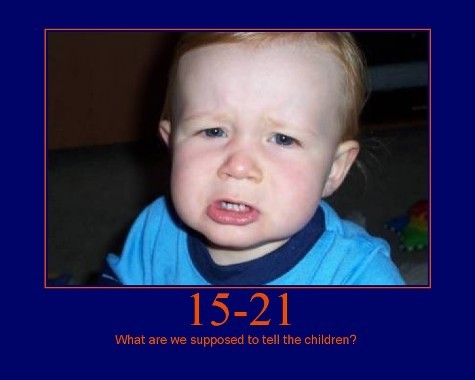 A picture of someone vomiting might have been more appropriate for tonight's recap. Although the act of vomiting is rather violent. And though some Tigers fans might feel that way right now (Watch out, small animals!), this game seemed to inspire more of an arms-folded disgust.

Was it entirely predictable that the Tigers would follow up a game in which they scored 10 runs and knocked 18 hits with a flaccid one-run, six-hit performance? I'm not saying that this lineup should've done more against Josh Beckett, because he was quite good tonight, striking out eight batters. What I am saying is that more - much more - is expected.

Justin Verlander didn't throw a very good game. You're just not going to beat many teams giving up five runs and nine hits. But how about scoring some runs for the guy? Verlander deserves to be under .500 with the way he's pitched this season. But if he gets any kind of run support, he's not dragging around a 1-6 record. Maybe that's irrelevant tonight, but don't you wonder if the tiny margin of error his team provides is getting to him? I imagine Verlander sometimes feels as if he has to throw the ball through a toilet paper tube.

By the way, has Kevin Youkilis officially been fitted for his Tigers Killer jacket? Because he's definitely in the club now, after hitting yet another home run against Detroit.

Curtis Granderson is 0-for-10 over the last two games, with seven strikeouts. He batted 2-for-18 in this series, striking out in eight of those at-bats. Miguel Cabrera batted 2-for-14. (And we'll have more on him tomorrow, though The Daily Fungo has a head start on us.) Magglio Ordonez hit 4-for-16 with one RBI.

While enduring his weekly conversation with Rob Parker, the Detroit News' Tom Gage brought up Sparky Anderson's old adage that you couldn't judge a team until it's played 40 games. Well, the Tigers have played 36 of them and are five games under .500. Bear with me because I was an English major, but even if the Tigers win their next four (and how confident do you feel about that?), they'll be one game under .500 at the 40-game mark.

Maybe we should save ourselves the trouble and pass judgment now.

The Tigers didn't make it worthwhile to see this game through, but here are those who chimed in before it just became a slog.