Usually, I like to break down the pitching match-ups in these GameThreads, but let's get right to the point. The Tigers need to score more runs for Justin Verlander; it's not much more complicated than that. They've given him three total runs over his last three starts, which is borderline criminal. Detroit has scored more than two runs for Verlander only three times this season, and they've won two of those games.

Unfortunately, the Tigers haven't scored very much against Javier Vazquez over the past couple of years. He shut them out back in April, and has allowed just eight runs in his last four starts vs. Detroit, all of which he's won.

In an attempt to try and continue the good ju-ju from last night's victory over the White Sox, I'm running this photo from my friend Katy, who attended the ballgame. 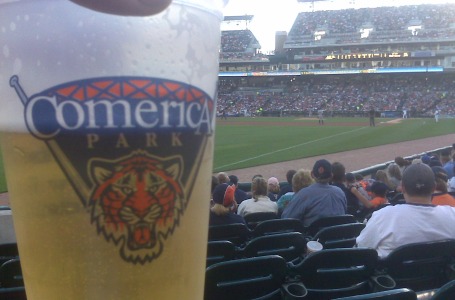 I'm sure that's apple juice in the cup. Keeping it cool and healthy down there at the CoPa. If you have any photos you'd like to pass along, feel free to post them as a FanShot, and maybe we'll move them over here to the main page for everyone to see.

I got off to a late start with the blogging today, so I hope you'll indulge me as I link to the posts that you may have missed before tonight's GameThread.