Share All sharing options for: Provoking the Beast: Tigers 5, Dodgers 0 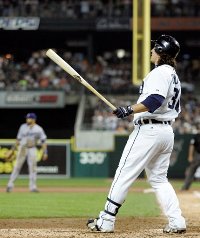 Do you think Cory Wade went to the zoo much when he was a kid? The reason I ask is that one of the things your parents tell you - as do the signs posted nearby - is that you don't provoke the animals. You do not poke the tiger.

Yet that's exactly what Wade did when he drilled Carlos Guillen in the elbow during the eighth inning. The Tigers were already up 3-0, and looked to be headed to a fourth straight win. But Wade made sure the win was finished with authority.

After a lot of jawing between Wade and Guillen, and both benches and bullpens spilling onto the field for some chest-thumping, finger-pointing, and jibber-jabbering, Magglio Ordonez came to the plate and got the last word. He'd been tantalizingly (frustratingly?) close to hitting a home run over the past two games, taking balls deep to the warning track against Octavio Dotel and Derek Lowe. This time, Maggs finally connected - and he knew it.

Do not poke the tiger. And do not push a team that's finally coming together and playing winning baseball.

And where would the Tigers be right now without Armando Galarraga and Freddy Dolsi? Maybe holding the other team to just three hits isn't entirely impressive, considering that the Dodgers seem to be hitting even worse than the Tigers were just over a week ago. Only one run in their last three games? That's cold, baby. Unlike the duo that's come up from Toledo to save Detroit's pitching staff. Galarraga is as close to a sure thing as the Tigers have in their starting rotation, and Dolsi is finally giving Jim Leyland a late-inning reliever that can be trusted not to walk a bunch of batters and give up some runs.

I'm embarrassed to say I nodded off before Maggs' big home run in the eighth. I think I had a few too many pops during the rain delay. But these guys watched the fun until the very end.