The Tigers haven't cruised to many easy wins this season (and maybe this one wasn't so easy, as the Dodgers briefly made the game sort of interesting), but when a win appears to be in the bag, my mind drifts to writing these recaps. Especially the titles. Originally, I wanted to make the recap about Eddie Bonine, because his debut was kind of the story today. But all I could think of were plays off "bovine," and that didn't really inspire me. "Simply Bovine"? 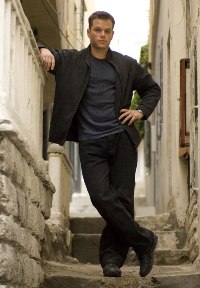 I also thought about playing off the Jason Bourne movies. Except "Bonine" doesn't rhyme with "Bourne." They just sort of look alike. But what would the title be? "The Bonine Supremacy"? Not unless the kid pitched a shutout. "The Bonine Ultimatum"? Okay, but... Bonine gave up six runs and nine hits. Not exactly a demanding - or commanding - performance. Maybe "The Bonine Identity" would've worked, since most of us didn't know anything about this guy. But by then, I'd decided to give up on the whole thing. Kind of like I probably should've given up on these first two paragraphs. Is this too much like a Beefshower post?

Okay, the game: How would you like to be the Dodgers, finally breaking through to score some runs, only to see your formerly upper-tier starter crumble after three innings and pitch batting practice in the fourth? Actually, that's a pretty familiar feeling in Tiger Town. That's how Detroit's baseball team was playing until just over a week ago. Whatever's wrong with Brad Penny these days, at least he didn't suddenly get better against the Tigers. When this team is at its best, perhaps it will beat good pitching. But at the very least, it should be pounding bad pitching. And that's what happened today.

That's five in a row. My buddy Rob just asked me if the Tigers had finally turned the corner. I told him I wasn't sure, but I think they can at least see around it right now. Maybe the Tigers were just waiting until they had the Detroit sports world's full attention.

Who put off Saturday yard work (unless you did it early) or a matinee of The Incredible Hulk (unless you caught a noon-ish show, as I did)? These guys!

Thanks to tbliggins, ThaWalrus9, rook34, spotstarters, Zappatista, Juskimo, UofAZGrad (stopping by from the AZ Snakepit community to see the D-Backs' division rival get trounced), ahtrap, and Tony K for keeping five alive and updating those who couldn't watch the game, due to FOX's national coverage.