Share All sharing options for: Oh, That Zito! Tigers 7, Giants 2

The commentors at McCovey Chronicles give it to Barry Zito worse than I ever could, so I'm just going to run a photo posted over there . 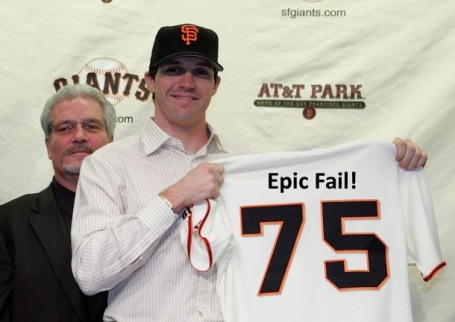 How did the Giants' $126 million man do today vs. the Detroit Tigers? He allowed five runs on five hits, with four walks. All in just two innings. After the smoke cleared and the score was final, Zito was tagged with his 11th loss of the season, against two wins. Wow.

I don't always like to talk trash about the other team (unlike San Francisco Chronicle beat reporters who refer to players as "scrubs" and "Homer or Nothing") because I subscribe to the Rasheed Wallace "both teams played hard" school of thinking, and am just happy to take the win. But it's like the Giants do the other team a favor by putting Zito on the mound.

Having said all that, the Tigers still had to go out and beat the guy, which they did. Placido Polanco gets the Happy Tiger Claw with a 4-for-4 game, including two RBIs and three runs scored. Armando Galarraga also continued to impress, pitching seven innings and allowing two unearned runs. (And he walked twice, as a hitter!) Really, the only bit of bad news - if you can even call it that - is that Marcus Thames's run of home run heroics ended today. The Hammer went 0-for 3 this afternoon. But hey, that doesn't mean his next hit can't be a homer.

Hey, we get to sleep earlier tonight! Unless you're a night owl that's normally turning in at 2 am. (I used to be, and maybe could be again someday.)