After last night's 6-2 loss, I figured we could use a bit of a laugh. So if you haven't seen this yet, courtesy of Deadspin (and rock n rye, who posted it in the GameThread), here's Jim Leyland and his mascot counterpart, "Jim Flealand." 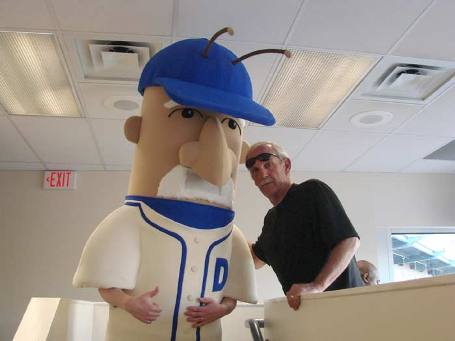 Any chance there were more photos taken after this? I mean, Leyland and Flealand at least went outside for a smoke, right? Another question to consider might be whether or not Flealand would give Fernando Rodney the ball right now.

Moving onto tonight's game, Cha Seung Baek makes his fourth start for the Padres since being traded from Seattle in late May. And he's thrown quality starts in two of his last three appearances. But it's Baek's start on May 9 of last year that we should probably talk about. That night, he pitched a complete game against the Tigers at Comerica Park, holding Detroit to two runs on six hits. Three of the players who got hits were Brandon Inge, Gary Sheffield, and Craig Monroe.

What can be expected from Nate Robertson tonight? Usually, he alternates between good starts and bad starts. But he's pitched well in his last two appearances. Actually, he was outstanding last Sunday against the Dodgers, allowing no runs on four hits in six innings. So is he due for a return to giving up four runs a game? Or has Nate had something of a breakthrough?

Ready to spend your S-A-T-U-R-D-A-Y night in a GameThread?