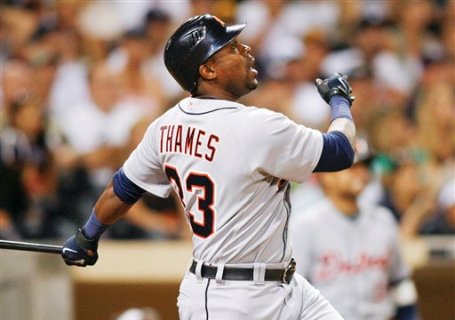 I'm embarrassed to admit I fell asleep in the 5th inning of last night's win over the Padres, shortly after Nate Robertson walked Cha Seung Baek. The last thing I remember before conking out completely was Mario Impemba saying the Padres had taken a 5-4 lead. So I sort of expected to wake up this morning and read about a second straight Tigers loss.

How did I stay asleep through all the fireworks that went off after that? How did the thunderclap that came from Marcus Thames's mighty bat in the seventh inning not shake me out of my slumber? Petco Park has a way of making every home run seem impressive, but Thames' shot to left-center was particularly majestic. Since I slept through it, I don't think anything I could write would be better than the quote from Blake in the GameThread:

I don’t believe in God, but if I did, my God would be Marcus Thames.

Once again, the Tigers don't let a loss hang with them. Friday night was a setback, not a downfall. That especially applies to the bullpen, which allowed just two hits in three innings. (Miner, Dolsi, and Jones, with a little bit of Seay sprinkled in between, doesn't seem like a bad way to go at the end of a game right now.)

This afternoon, the Tigers go for the series win and an over-.500 west coast road trip.

I couldn't make it through a S-A-T-U-R-D-A-Y night in the GameThread, but these guys are made of stronger stuff. (Or they made sure to take a nap earlier in the day.) Instead of subjecting you to more Bay City Rollers, here's some Ned's Atomic Dustbin.

Too much for a Sunday morning?