Share All sharing options for: The Maggs Show: Tigers 5, Padres 3 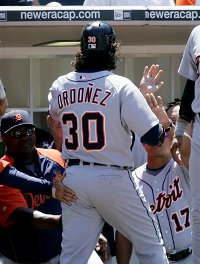 Magglio Ordonez was due, after hitting the ball hard but seeing it swallowed up in the vast landscape of Petco Park. He finally cashed in yesterday, helped just a little bit by Jody Gerut bouncing his drive to dead center field over the fence last night. Today, Maggs didn't need any help to get rolling.

A two-run homer in the fifth inning put the Tigers ahead for good, and just because it was that kind of day for him, Maggs also drove in the game-winning run in the seventh with a double. The San Diego weather was clearly beginning to agree with Ordonez these last couple of days, as he went 4-for-8 with two home runs and five RBIs.

Someone else who was helped earlier in the season by a generous bounce off an outfielder's glove was Pudge Rodriguez. In today's GameThread, someone wondered how Pudge could have only one home run this year when he was crushing the ball in Spring Training. A couple of innings later, Pudge took Heath Bell deep to left field for his first non-glove-aided home run of 2008. Clearly, Pudge's home run totals should be a more frequent topic of conversation.

The ninth inning provided a scare, but not for the usual reasons that Todd Jones creates. Gerut hit a chopper back up the middle which smacked Jones on the outside of his right knee, sending the Tigers' closer to the ground in pain. Fortunately for Jones (I'm guessing), the ball skipped off the grass before it met Jones' knee, which lessened some of the potential impact. Jonesy shook it off and got Edgar Gonzalez to ground into a double play, effectively ending any last threat the Padres could muster.

How much can change in three weeks? Remember the last time the Tigers came back from California, licking their wounds after getting swept in Oakland? This time, Detroit returns from California with a 4-2 road trip, and six more games of Interleague Play to come. (And as I write this, the Cubs are up 5-0 on the White Sox in the sixth inning.)

How much fun were the GameThreads this weekend? Could they be even better with the Tigers back in the eastern time zone this week?