Share All sharing options for: The Bonine Supremacy: Tigers 7, Rockies 1 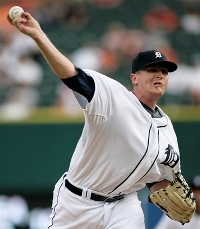 A few players could've gotten the Golden Tiger Claw for their performance in tonight's series-opening win over the Rockies, so I put it to the BYB Brigade in the GameThread. Who should be the headliner? Eddie Bonine threw a great game. Curtis Granderson had four hits, including two triples. And Clete Thomas went 3-for-3.

I'm not sure how much of a dilemma it ultimately was, but Matt posed too convincing an argument:

A 6 year minor leaguer, making his third career start, just held a team that went to the World Series last year to 1 run in 8 innings.

Well played, sir. Well played. Besides, I've been dying to use Bonine in a Jason Bourne pun ever since he was called up to Detroit. (I know, it's a stretch. "Bonine" doesn't rhyme with "Bourne." But both names are six letters, and begin with "b" while ending with "e." It works for me.) Bonine was fantastic tonight, giving up just five hits to the Rockies over eight innings, and getting it done with just 99 pitches (69 of them for strikes). Had Joel Zumaya not needed the work (and perhaps a confidence boost), maybe Bonine would've finished this one off.

It was also pointed out in the GameThread that Bonine has done this against three NL West teams, so maybe we shouldn't get too crazy about Bonine solving the Tigers' fifth starter problems. But for right now, he's doing the job. And doing it very well. Throwing strikes, keeping the ball down, and not walking any batters is a fine way to get through life, son.

But we can't get through this recap without talking about Granderson's night, as well. It wasn't very long ago when he was fighting his way through a horrible slump. But it certainly feels like a long time ago. Maybe 15 games ago? Grandy extended his hitting streak to 15 games tonight, with a 4-for-5 night and brought the same jolt he supplied last year by smoking balls into the gap and blazing around the bases for two stand-up triples. Over those 15 games, Granderson is hitting .443 (27-for-61). He's 8-for-10 in the last two days.

I don't know about you, but it's felt like a long week, so I was happy to see this one end before 10 p.m. Thanks to ThaWalrus9, pfuhrmeister, JIMDALE, rock n rye, Tony K, wepri31, miggy4mvp, tplants, and ReichardZ (Welcome!) for spending their Friday night watching the Tigers continue their dominance over the National League.