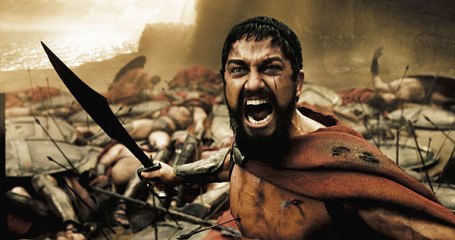 Yes, I know the photo is from 300, which isn't .500. But really, doesn't that image look more fearsome? You can imagine all those bodies strewn across the ground as NL West teams. Or maybe this is how it looked in the Comerica Park stands after Todd Jones blew the save in the ninth by giving up four runs on five hits.

(Wasn't the heavy booing - or cheers for Leyland when he came out of the dugout to replace Jones - a bit harsh? Yes, blowing a three-run lead is brutal, and it was the kind of implosion that we've been dreading from him. And the prospects of not reaching .500 after fighting so hard to get there seemed hugely disappointing. But that was Jonesy's first blown save of the season, folks.)

This walk-off stuff is pretty fun, eh? The Tigers have pulled it out in the bottom of the ninth in three of their last four games. Remember earlier in the season when it seemed like they could never overcome a deficit? I'm pretty sure I called this team mentally weak more than once. But not anymore. Push these Tigers into a corner and they fight back. And they've clawed back all the way to a 40-40 record just before the halfway mark of the season.

The Golden Tiger Claw goes to Ryan Raburn, who replaced the oblique-tweaked Magglio Ordonez (he, Brandon Inge, and Gary Sheffield can form a new club) and gave Detroit a major boost off the bench. First, he brought his big boi bat in the fourth inning for a grand slam that broke the game open - at least until the ninth inning. But in that ninth, Raburn drew a walk that made him the lead run. And he officially became the game-winning run when Miguel Cabrera blasted a double into the right-center field gap to send the Comerica Park crowd home happy.

Saturdays aren't often a big night in the GameThreads, but those who stayed felt like champions when this one was over.