The Big Tilde Goes Down

Share All sharing options for: The Big Tilde Goes Down 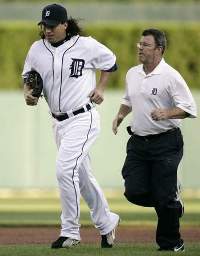 "Oblique" has essentially become a bad word in baseball over the past couple of seasons. Any time you hear that particular muscle mentioned in a sentence with a player's name, it's not usually good news. So when Magglio Ordonez was diagnosed with a spasm in his oblique last night, it seemed likely that he'd miss a few games. Especially when Maggs took himself out of the game rather decisively.

Whether it's because the tweak in his oblique turned out to be more serious or the team weighing caution against a possible longer-term injury (as happened with Brandon Inge), the Tigers put Ordonez on the 15-day disabled list before today's ballgame.

(Thanks to ashmark for posting the news in today's GameThread. Nice way to make a first impression.)

How the timing of this injury is viewed might depend on the fullness or emptiness of your drinking glass. Just as the Tigers reach the .500 mark and are playing their best baseball of the season, their best hitter goes down. When things are running smoothly, you don't want to see a choke or sputter. The next couple of weeks will be important, with Detroit getting a chance to make a big move in the AL Central.

But putting Ordonez on the disabled list now gives him the opportunity to nurse his oblique muscle back to health, but also rest up from the grind of the past 80 games. Gary Sheffield recently talked about the benefits of getting time off to rest his oblique and nagging shoulder injury, and the results since his return back that up. Maggs wasn't as banged up as Sheff, but sitting down for a bit would surely keep him fresh later in the season.

The DL stint would also run right into the All-Star break, which could give Maggs even more time to heal up. If you were hoping Maggs would join the American League elite at Yankee Stadium for the All-Star Game, however, I think you can forget about that. (On the field, at least.)

I'm not going to suggest that Ordonez's injury doesn't hurt the Tigers. That would be ludicrous. But this isn't happening when Detroit's offense was struggling and desperate for anyone's bat to show some life. Curtis Granderson has come back in a big way, Marcus Thames has found the thunder, Sheffield is healthy again, and Miguel Cabrera looks to be finally settling into a groove. Defensively, Clete Thomas and Matt Joyce (who was called up to replace Ordonez) can cover right field, along with Thames, and might even provide something of an upgrade with the glove. The Tigers should be able to withstand a two-week absence by Maggs.

(If nothing else works out, maybe they can ask Todd Jones to put his Magglio hat/wig back on and fill in when needed. He needs to get that swing down, though. And we have no idea how he is in the outfield. Okay, that's not even a funny suggestion, is it?)

Weren't some people bemoaning the Tigers' lack of depth earlier this season? So much can change in a couple of months.