Share All sharing options for: Mud Hens Give You Wins: Tigers 4, Rockies 3

So long, National League; it was great while it lasted. And I really mean that. It was great. You (especially the NL West) were berry, berry good to us. Thank you for helping to revitalize the 2008 baseball season in Detroit.

The Tigers cleared a big hurdle today in going over .500. (And that was not intended as a pun toward the Rockies' manager.) In past seasons, getting past that break-even point has been a pretty steep obstacle to overcome. Was it back in 2000 when Todd Jones finished off a game, and then held an index finger in the air, indicating that the Tigers were only one game away from .500? And that seemed like a big deal back then. The enormous difference, of course, is that those Tigers weren't a very good team and playoff contention was more of a hope than expectation. Things are a little bit different around here eight years later. 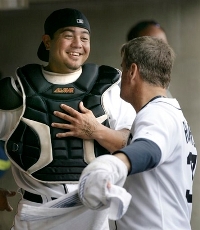 Once again, Detroit rallied from behind to snatch a win from the jaws of the Colorado Rockies. Kenny Rogers looked like he might not make it out of the third inning, but after a 1-2-3 double play got him out of trouble, he pulled himself together and toughed it out through the sixth. And it was in that sixth inning that the Tigers got the one big hit they needed.

Virtually nothing was expected from Dane Sardinha with the bat. (He was hitting .206 in Triple-A.) Just play good defense when asked to back up Pudge Rodriguez. Any offense would be a plus. Some might call it icing on the cake. If so, Sardinha spread some sweet, creamy stuff on the Detroit victory cake today. The Tigers seemed to find every gap in this series, while the Rockies had a hard time closing in on those balls. Sardinha smacked a ball into left-center for what turned out to be a two-run triple, scoring Marcus Thames and Edgar Renteria, and that was the difference in the ballgame.

So if Red Bull is supposed to give you wings, what have the Mud Hens been giving the Detroit Tigers lately? Just look at the past week. Sardinha had the two-run triple today. Last night, Ryan Raburn (who began the season in Toledo) hit a grand slam and scored the winning run. On Friday, Eddie Bonine pitched eight innings of one-run baseball. Thursday, Clete Thomas drew a game-winning bases-loaded walk. And don't forget Michael Hollimon, who's gotten four hits in his last three games.

As Blake said in his recap, the Tigers now seem to have a different hero each day. But a lot of those heroics are coming from where it wasn't expected. Role players are the glue that holds a team together. Youth gives a flagging veteran team a boost of enthusiasm. It's all coming together beautifully right now.

Let's all say goodbye to the National League together now. (Though hopefully, we'll be seeing them again.)