I Don't Think We Should See Each Other Anymore, Craig Monroe: Twins 6, Tigers 4

Share All sharing options for: I Don't Think We Should See Each Other Anymore, Craig Monroe: Twins 6, Tigers 4

How's it going? Tigers fan here. I was a fan of yours during your days in Detroit. Man, you hit some big home runs back in the day. 2006, baby! We called you "Clutch Craig-o." At least I did. Never quite caught on like I hoped it would. Maybe I should've made some t-shirts. 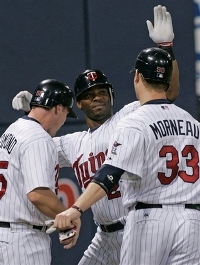 Anyway, I watched the game tonight. Saw you with your new team. You look good. Have you lost weight? Or is it the pinstripes? They are slimming, I hear. Anyway, you seem happy. And no matter what happened in the past, that's really all we want for you.

Your old teammate Nate Robertson really didn't have it going on. He was Houdini last time out, but giving up another 11 hits caught up with him this time. I figured Detroit had a chance as long as Nate kept it at four or five runs, because that's just what he does. But once you guys scored that sixth run, I figured it might be tough.

But it's really the first, second, and third runs the Twins scored that compelled me to write to you tonight, Craiggers. Has it really come to that? A three-run homer from you? That familiar whip-like swing with the one-handed follow through blasting a ball deep to center field over your former fellow outfielder, Curtis Granderson?

I really thought we were going to be friends, C-Mo. I know everybody says that, but I felt like we meant it. When I got the text message from Big Al telling me you'd been designated for assignment last year, I was surprised. I didn't think you'd go. But I also didn't think we'd hurt each other afterwards. Was it something Mike McClary said? I tried to talk to him about that.

So I guess that's how it is, eh? I mean, you also did this to the Tigers back in May, so it's pretty clear how you feel. It's probably a good idea if we avoid each other from now on. I don't know what your manager might have to say about it, but Detroit is starting Eddie Bonine tomorrow, and he's a right-hander, so I'm guessing you'll be sitting. And it'll be awkward trying to act like you're not there. But it's probably for the best. I'm sorry it had to be this way, Craig-o.

P.S. Did you see Cleveland blew it against the White Sox tonight? I guess if they can't play for the division title, they want to make sure no one else can, either. (Well, except the White Sox. But you know what I meant.)

You know who else you hurt, C-Mo? Try to explain yourself to these other Tiger fans, too.