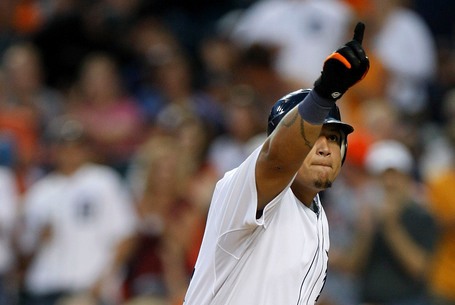 I know tonight's game didn't just come down to one moment. It was a roller coaster ride of emotion, from the lows of Detroit falling behind 4-0 (during which you could see Eddie Bonine throwing his major league gig away) to the building anticipation for a rally that culminated with a game-tying homer from Matt Joyce. And how about a tip of the cap to Casey Fossum for putting out the blaze that Bonine lit and giving his team a chance to stage that comeback? (And how about those strikeouts? Six in 3 1/3 innings? When did Fossum become Cole Hamels?)

Up until the sixth inning, were you beginning to question whether or not this Tigers team really had it in them to make the sort of run we're all hoping for? Did the reality of just how fragile, how precarious this season really is seem horrifyingly clear until Detroit began to put some runs on the board?

But with one swing of the bat in the bottom of the ninth, Miguel Cabrera wiped that dread away. That two-run, walk-off homer gave us one hell of a moment to savor until game time tomorrow afternoon. Damn, how much fun was that to watch?

Issues with my internet connection prevented me from enjoying that moment with everyone in the GameThread tonight (ARGH!), but the rest of the BYB Brigade got through those nine innings of emotion together.