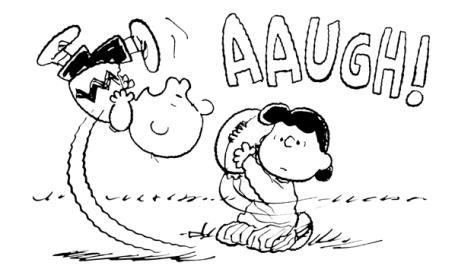 It's not going to be a long recap tonight, folks. Maybe it's because tonight is a Friday, but that felt like three hours of my life I'd like back. As a Tigers fan, I can take getting beaten by Justin Morneau. But when it's Nick Punto driving the runs in for Minnesota, I begin to think there's something larger at play in the universe.

The first two games of this series have felt much like the Charlie Brown-Lucy scenario. The Tigers came into this weekend hoping to win three or four games, just as Chuck thinks he'll get to kick that football. The Twins bring over a team that looks beatable, setting the same sort of trap that Lucy does when she sets the ball down. And just as the Tigers feel like they can get back into this AL Central race, like Charlie Brown rearing his leg back to kick, the Twins pull it all away, as Lucy does with that football, sending the poor schmucks into the air unfulfilled, frustrated, and screaming.

Now Detroit is faced with trying to salvage a split, and that already feels like a disappointment.

Despite the Debbie Downer outcome, we had a pretty good time in the GameThread, complete with a digression into early-90s one hit wonder grunge rockers. These guys are growing hungry... for a win over the hated Twins.