The Joy of Joyce

Share All sharing options for: The Joy of Joyce 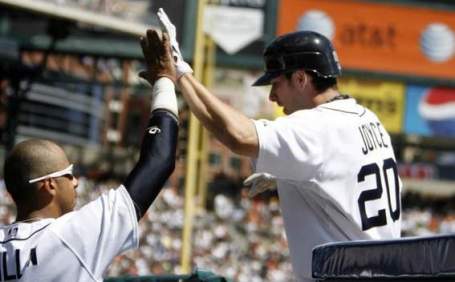 Once again, I'm a bit late with the Game Recap, so there's really not going to be one. The Mike McClary birthday bash just kept me out too late. It was a great time had by all, and we managed to record an All-Star break podcast at some point, so I'll link to that when Mike posts it.

But really, all I wanted to was post a photo of Matt Joyce, who crushed a ball over the 420' sign in dead center, into the shrubs, for his ninth home run of the year. A frequent topic in the party suite yesterday (constantly brought up by me to whomever I spoke to) was the dilemma the Tigers will face with their outfield and designated hitter after the All-Star break.

What are they going to do? Joyce can't possibly be sent back down to Toledo once Magglio Ordonez returns from the disabled list, can he? He's swinging too hot of a bat right now, and - Thursday's error notwithstanding - providing solid defense in right field. Do we attribute this surge to Joyce's kitty rescue last week, as Samela (yes, I know it's Samara) has, with typically brilliant photo illustration)? Since he found that kitten, Joyce is hitting .429 (9-for-21) with four home runs and six RBIs. His average has gone from .247/.314/.558 to .266/.329/.649.

And how about Joyce's fellow corner outfielder, Clete Thomas? Our cult leader (The Cult of Clete!) smacked his first home run of the season, giving Detroit its first lead of the game in the second inning. His bat isn't as sizzling hot as Joyce's, but Clete provides another left-handed stick, plays good defense in left, and isn't afraid to draw a walk.

What we have here is a bit of a logjam. Five players, including Marcus Thames and Gary Sheffield, for three lineup spots. Jeff Larish should probably be included in that mix, as well, but I'm going to presume he goes first when Maggs returns. The dilemma will come when that fifth spot in the starting rotation rolls up a week from today. Jim Leyland has already said that Sheff will be the DH in Detroit's first game after the All-Star break, yet also admitted that he was "concerned" about him. Leyland is loyal to a fault with Sheffield, but what kind of trigger finger is he going to show if Sheff struggles after his three-day vacation in the Bahamas?

Is a lineup with Joyce in left field, Maggs in right, and Thames at DH the best team the Tigers can put on the field right now? Maybe Clete draws the short straw here, as he doesn't supply quite as potent a bat, has less position versatility than Ryan Raburn, and might benefit from getting regular at-bats in Toledo. Or is this the type of situation that calls for a trade? Perhaps an even tougher decision is called for, as well.