Who Gets the BYB Gear?

Share All sharing options for: Who Gets the BYB Gear? 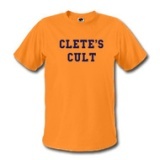 Due to the length of the All-Star Game (as those of you who stuck it out know all too well), Carlos Guillen's night didn't go as he - or anyone else, most likely - probably expected. Guillen got into the game, which apparently wasn't necessarily the original plan. But he played much more (three at-bats, seven innings at third base) than anticipated. (I figured one at-bat, tops.)

So the predictions I laid out for our little t-shirt contest didn't lay out as smoothly as I hoped. And my idea for a tie-breaker (pick the MVP) didn't work so well, either, as no one's pick was in the game by the end. But we did have two contestants who made more correct picks than anyone else. Both BigAl and dettigionswings'stons got four of the five predictions right, with the latter being the only one who picked a strikeout for Guillen.

Alex Rodriguez and Manny Ramirez were their respective MVP picks, both of whom went 0-for-2 and weren't close to being a factor in the game's outcome, so the tie-breaker was rendered moot. (I briefly considered giving dettigionswings'stons the win, since the actual MVP, J.D. Drew, is Manny's teammate, but that would've been a stretch.) Therefore, the only fair thing to do, it seems to me, is to give the BYB Gear t-shirt of their choice to both of these guys.

Both of the winners need to e-mail me at ian.byb@gmail.com with your pertinent information, including address, t-shirt size, and the garment of your choice from the BYB Gear store.

And thanks to everyone who participated, both in the contest and the All-Star GameThread.