Share All sharing options for: Marlins Fishing For Pudge? 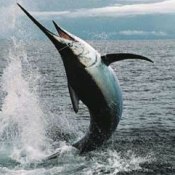 The Detroit Tigers aren't quite in a position to be selling off any players right now, let alone a catcher. But if they do decide to shed some of the older, higher-priced talent from their roster, the Florida Marlins are interested in Pudge Rodriguez.

The Marlins are in need of a catcher after Matt Treanor went on the disabled list last week with a strained hip. According to the Miami Herald, they're apparently not too enamored with available catchers, such as Paul Lo Duca and Yorvit Torrealba, and decided to shoot higher. The Tigers said, however, that Pudge wasn't available.

Hey, wait a minute - doesn't Florida already have one of Detroit's former catchers? Yes, Mike Rabelo was part of The Trade back in December, but he was sent down to Triple-A Albuquerque in late June, after batting .202/.256/.294 with three homers and 10 RBIs in 122 plate appearances.

Of course, the Tigers' stance on trading Pudge could presumably change if they fall out of the AL Central race over the next few weeks. They could use the rest of the season to get a head start on Brandon Inge being the starting catcher next season. But if Pudge stays with the Tigers through this season - and it's very likely he will - at least he knows one team that might be interested in his free agent services during the winter.