Share All sharing options for: The Olympian Mud Hens 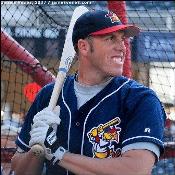 Earlier today, USA Baseball announced its roster for the 2008 Olympic Baseball team, and a familiar face will be among those headed to Beijing. Toledo Mud Hens third baseman Mike Hessman was one of the 23 (with a 24th to be named by July 22) players who will compete in the baseball tournament held from August 13 to 23. (The Beijing Games will be played from August 8 to 24.)

But Hessman wasn't the only Mud Hen selected to the Olympic Baseball team. Closer Blaine Neal will also be on the roster selected by manager Davey Johnson and general manager Bob Watson.

In 419 plate appearances with Toledo this season, Hessman is batting .266/.368/.596 with 30 home runs and 68 RBIs. Neal has pitched in 33 games for the Mud Hens, compiling a 1-0 record with 23 saves, and 36 strikeouts in 32 1/3 innings. Both players were also named to the International League All-Star team (along with teammate Brent Clevlen) earlier this month.

The United States returns to Olympic competition after failing to qualify for tournament play for the 2004 Games in Athens. In 2000, the U.S. team won the Gold medal over Cuba at the Sydney Games. This will be the fourth Olympic Games USA Baseball has competed in since baseball became a medal sport in 1992.

You can view the complete roster, which is made up almost entirely of professional ballplayers, at USABaseball.com.