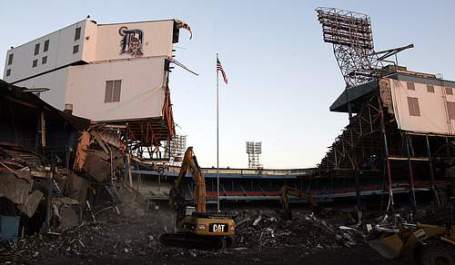 In one week, we've gone from stories saying the field from Tiger Stadium will be preserved (which seemed to just sneak out there, under the radar) to reports that the whole thing, field and all, is coming down. I'm not really sure what to think anymore, and figure I'll just drive by the site one day and either some of the old ballpark will be there or it will all be gone.

But the Old Tiger Stadium Conservancy is trying its best to prove that it can generate the funding to preserve the field and roughly 3,000 seats, working to raise as much money as it can before the Detroit City Council leaves for its recess on July 29. (The OTSC's deadline was actually August 1.)

If you're interested in contributing to the effort, the OTSC is holding a fundraiser tonight at the Anchor Bar in Detroit from 6:30 p.m. to 10 p.m. There will be a $10 cover charge at the door, the full proceeds of which will go to the Conservancy. Live music will be performed and members of the Conservancy's board will be on hand to speak with.

You can get directions to the Anchor Bar (located at 450 Fort St.) here. Or if you can't make it to the fundraiser, but would still like to make a donation, you can do so at savetigerstadium.org.