Oh, By the Way, Rodney's On the Trade Block

Share All sharing options for: Oh, By the Way, Rodney's On the Trade Block 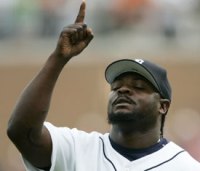 Holy burying the lede, Batman! (Is that the second time I've made that reference in a week? Sorry about that.) In a notebook headlined by second base prospect Scott Sizemore breaking a bone in his hand, the Freep's Jon Paul Morosi casually tosses out this little nugget:

The Tigers appear willing to include reliever Fernando Rodney in trade offers. The right-hander has been inconsistent since returning from the disabled list.

That strikes me as kind of a big deal. Maybe a headline item. Am I wrong here? Is that how far Rodney's fortunes have fallen in the eyes of the reporters who cover the Detroit Tigers, let alone the organization itself?

Or perhaps this is a case of the Tigers realizing they'll have to give up something to get something. Every team is in need of good relievers (including, um, the Detroit Tigers), so dangling a pitcher of Rodney's talent (as opposed to actual production this season) might tempt a team into making a deal. (In another article, Morosi also points to Luis Marte as a pitching prospect Detroit might be willing to trade.)

Can the Tigers afford to give up bullpen help, especially when Jim Leyland has said that he intends to divide Todd Jones' ninth inning workload among several relievers? I don't think so, yet acknowledge that Rodney isn't the first guy I would prefer to see come out of the Tigers' bullpen in a key late-inning situation. And maybe Leyland feels that way, too. Freddy Dolsi has probably made Rodney expendable, and another reliever (Clay Rapada?) could come up from Toledo to fill that spot in the bullpen.

So what do you think about this? Has Rodney become expendable? Can the Tigers afford to trade a reliever?