Last night, it was the Tigers who created a storm with their bats. Tonight, all the thunder and lightning came from the Orioles. 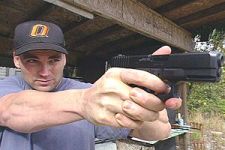 When Baltimore wasn't swinging and missing at what Armando Galarraga was throwing, they were knocking most of his stuff all over the field. That includes the very top of the left field foul pole, which Melvin Mora's deep drive bounced off of for a two-run homer in the sixth inning. Also taking Galarraga out of the park were Aubrey Huff (who almost had one off Todd Jones last night) and Luke Scott. Even Kevin Millar hit a drive to left that was caught at the fence by Matt Joyce.

But Scott wasn't done with the long ball after his shot in the second inning. In the eighth, he put the game out of reach with a two-run blast off Bobby Seay. And Seay didn't exactly keep Scott guessing as he threw six straight breaking balls (MLB.com Gameday had them all as curveballs). On the FSN Detroit telecast, Rod Allen pointed out that Pudge Rodriguez was apparently calling for a fastball on that home run pitch, but Seay shook him off. How'd that work out?

Unlike last night, the Tigers' offense couldn't bail the starting pitching out. Detroit did bang out 14 hits, creating plenty of opportunities to score, but shot themselves in the foot by grounding into three double plays (two of them by Magglio Ordonez).

This knocks Detroit back to .500, a level they just barely seem to get their nose above. They'll have to get better pitching to create some breathing room.