Share All sharing options for: Bunts and Choppers: Twins 7, Tigers 0 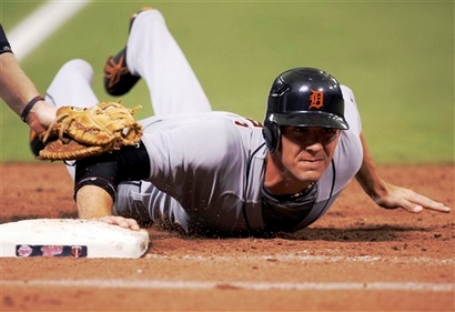 Did the Tigers' sudden run of injuries finally catch up to them this afternoon in Minnesota? Getting by without Magglio Ordonez was one thing. But a lineup without either Maggs or Miguel Cabrera, not to mention the resting Pudge Rodriguez, was probably going to hit a pothole eventually. I'd say a big zero on the scoreboard qualifies as that pothole.

But that's not giving enough credit to Nick Blackburn, is it? You can say he didn't face Detroit's regular batting order, and he may well have benefited from that, but any time you can hold a major league lineup to three hits over seven innings, that's a rather impressive accomplishment. Some of that good pitching juju was apparently passed along to Jesse Crain, who'd been something of a punching bag for the Tigers this season, but threw two scoreless innings of his own.

I'm not sure if bad juju had anything to do with Eddie Bonine's performance, but the artificial turf at the Metrodome certainly did. The Twins didn't have to hit the ball that hard against Bonine. Bunts and choppers did the job just fine. (Doesn't that sound like a dish you can order at an Irish pub? "I'll have the bunts and choppers, and a pint of Harp, please.") I'm sure Carlos Guillen has seen more than enough of baseballs bouncing off that carpet.

Jim Leyland says Cabrera should be back in the lineup for Thursday's opener against Seattle. Between that and the grass surface of Safeco Field, the Tigers probably stand a more than decent chance of rebounding tomorrow.

Let's look at the bright side. At least no one in a Tigers uniform caught one like the Yankees' Jose Molina did on Monday night.

I really just wanted an excuse to post that. I love how the Yankees' broadcasters try so hard not to say exactly what happened. "Gee whiz, Michael - looks like that caught him square in the cookies. He won't be able to put on his pants after the game, I bet. Give that man some ice."