Share All sharing options for: The Ace Delivers: Tigers 5, Orioles 1

This baseball thing isn't that complicated a game, is it? (Except when I try to explain it to someone who doesn't watch, I suppose.) Keep the other team from scoring, smack a couple of balls out of the park, and it all falls into place for a win.

Unfortunately, it hasn't been that easy for the Detroit Tigers this weekend in Baltimore. Last night, Nate Robertson seemed perfectly willing to let the O's score 20 runs. Thankfully, Jim Leyland took him out when he only gave up seven. 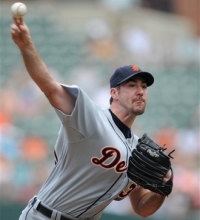 This afternoon, however, the Tigers got the kind of pitching that will win almost any ballgame. Justin Verlander was dominant, shutting down an Orioles lineup that seemed to hit everything out of the park in the previous three games. The home team only managed three hits, even though one of them by Luke Scott (who I really don't ever want to see again) drove in a run and gave Baltimore a brief lead.

But this series was all about who could hit the long ball. And today, Magglio Ordonez and Marcus Thames made sure Detroit got the chicks' attention. Maggs' solo shot tied the game in the third inning, and The Hammer put the Tigers on top for good with his own homer that was almost called a foul ball.

And that brings me to one big question I have about this series: Why does Brian Runge hate the Detroit Tigers?

Last night, he absolutely murdered a call, ruling Placido Polanco out at home when his foot plainly crossed the plate before he was tagged. Cameras from yards away clearly detailed what happened right in front of Runge's face. That cost Detroit a run and a possible win, and today, Runge was ready to do the same thing, ruling Thames' drive to left a foul ball. Fortunately, someone with a better angle (or better eyesight) overturned the call and correctly ruled Thames' ball inside the foul pole.

Even better, the Tigers scored three more runs, so it didn't really matter.

I missed all the GameThread fun (and German talk) today, largely because I was blinded by those orange jerseys the Orioles subjected us to. If I blink hard and then look at a blank wall, I can still see those monstrosities.